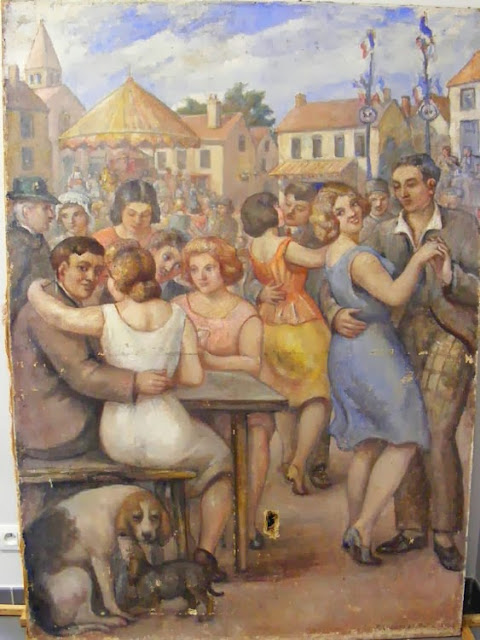 This charming painting belongs to our friend Bernard de la Motte. He intends to offer it to be hung in the Salle des Fêtes after it has been restored. I love its soft colours and the buxom women in simple summer dresses. The man in the hat on the left could be from the village today, but the woman next to him in the Tourangeau bonnet would never be seen now. The dogs in the foreground are wonderfully natural and the whole scene bathed in a sort of honeyed glow.

It was painted by his father in 1947 and Bernard thinks it depicts Bastille Day celebrations in Bossay sur Claise. The characters portrayed are real people from the village and Bernard would like to put names to the faces. He thinks the red-headed woman in the pink dress in the centre, sitting on the corner of the table, is his mother, and he can guess the identities of a couple of other people, but apart from that he has no clue.

So if you can identify any of these people please let us know by commenting on the blog, emailing us via our profile links on the right side bar or getting in touch with Bernard directly.
Posted by Susan at 09:00

Email ThisBlogThis!Share to TwitterShare to FacebookShare to Pinterest
Labels: Churches, Events, Towns and Villages near Preuilly

As they say, "priceless". What a wonderful piece of family history.

A delightful painting, Susan. What sort of size is it?

Those were the days...

I love it. It's great that Bernard wants everyone to be able to see it.

It is a marvelous picture...
I wonder if it was painted from a photograph...
or a series of photos...
he's got the movement so well...
and the perspective of the scene doesn't have any jarring wierdness.
I hope some of the combatants are identified... it will add more meaning still.


On another tack altogether...
I just spotted this on Auntie Beeb...
GrainCorp: Australia blocks takeover bid from ADM
http://www.bbc.co.uk/news/business-25134103
thought you might like to see it...
given your post on their golden mountains recently.