An Excursion to Saint Amand Montrond

Our friend Dan, a fellow Tractioniste, was one of the organisers of an event in his home town of Saint Amand Montrond and we agreed to go along with Claudette to provide atmosphere. The main event was
a series of lectures about the 'Secret War', which covered the clandestine activities of the British Special Operations Executive (SOE) and the French Resistance during the Second World War.

Our friend John came along with us as he has a particular interest in this period of history, and in old cars. Saint Amand Montrond is a couple of hours to the east of us, in the old province of Berry (modern day Indre and Cher) and we needed to be at the venue at 2.30 pm, so we decided to leave home mid morning and lunch at a restaurant along the way. We hit Lignieres around about lunchtime and decided to stop there. We've been to Lignieres before, as it was where we got very lost a couple of years ago trying to find the Prieuré d'Orsan. 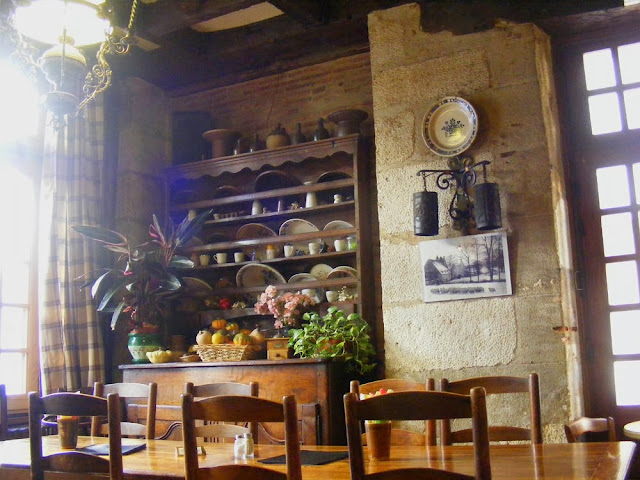 Simon quite fancied going to Les Trois Perdrix in Lignieres, a restaurant which specialises in haggis, curry and fish and chips, but to my relief, they were closed. (Apparently the owners are British, and we learnt from Dan's son Pierre that in fact they do excellent fish and chips.) We settled for the local creperie, and John very kindly footed the bill. We liked the authentically rustic interior -- it was one of those places that designers outside of France try desperately to reproduce and never get quite right. 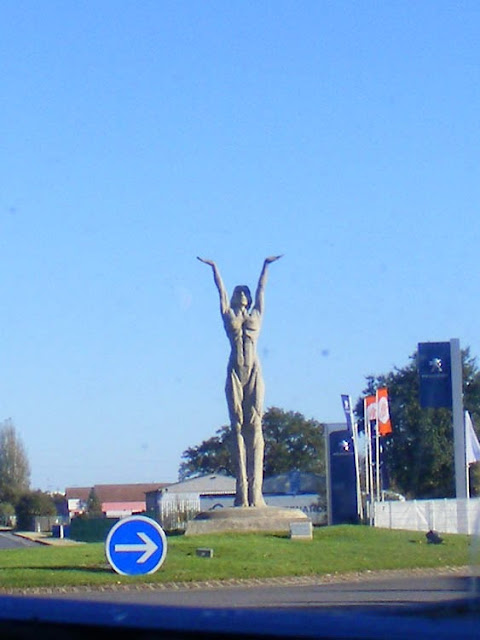 Once lunch was done we headed off to Dan and Marie Christine's. After a brief stop for coffee with the gathered Tractionistes we drove in convoy through Saint Amand Montrond and to the Cité de l'Or, which was the venue for the event. This town of 12 000 people is notable for the quantity and quality of their public art, mostly statuary.


L' Amour, bronze, by Louis Derbré, who grew up in the Pays de la Loire. 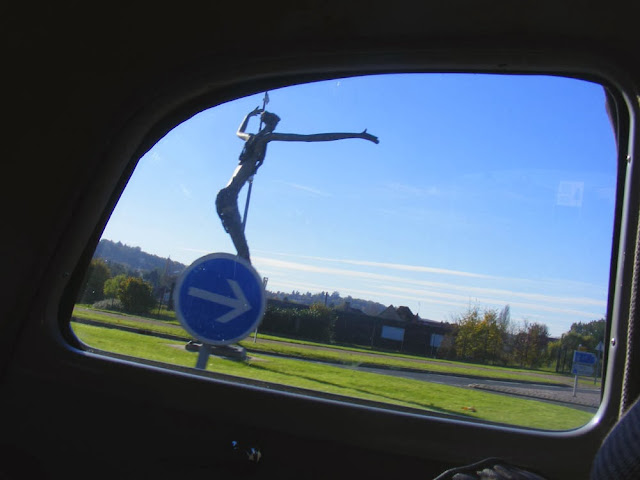 The Cité de l'Or is an impressive glass pyramid which functions as a cultural centre, with lecture theatre, museum and gallery spaces and a shop to showcase the local products. I asked Marie Christine why it was called the 'City of Gold' and she said it was because 'there is gold here'. I initially interpreted that as meaning that there was gold in the river or surrounding hills. In fact, it is because the town is officially the third centre of goldsmithing in France, an industry that was established in the late 19th century by a Parisian jeweller.


La Cité de l'Or, Saint Amand Montrond. Can you pick which one is Claudette? 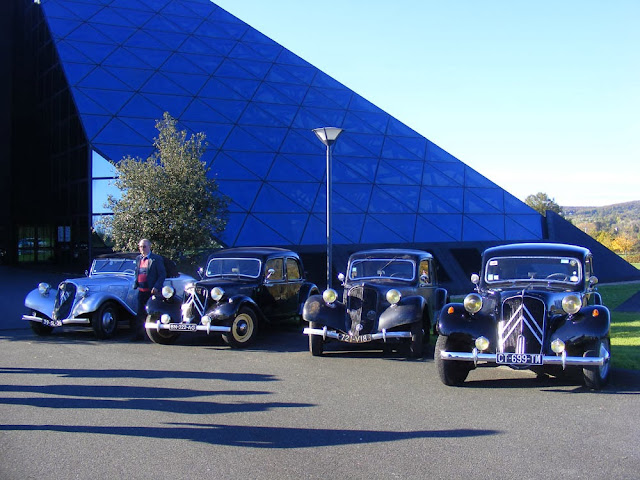 The jewellry on show, made by local artisans, was lovely, very wearable, and by no means expensive. The lectures, on the other hand, were somewhat disappointing. We sat through 3 hours of someone who was clearly passionate about his subject, but not a good public speaker.  Like most enthusiasts he tried to impart too much information in too little time, and he read his words in full rather than speaking from notes. John and I came away thinking we would have done better to have read the book, Simon just fell asleep. It was fascinating how well behaved the audience was though -- no shuffling, no talking amongst themselves, no coughing, no pushing past others to go to the toilet 15 times in the course of a lecture. Everyone appeared to be focused on the speaker and listening. There was no master of ceremonies either. The speaker simply started, at the appointed hour, without being introduced, and without introducing himself. At the end no one formally thanked him, although many people went up to him to personally thank him and exchange a few words.


Reflected in the roof of the bar. 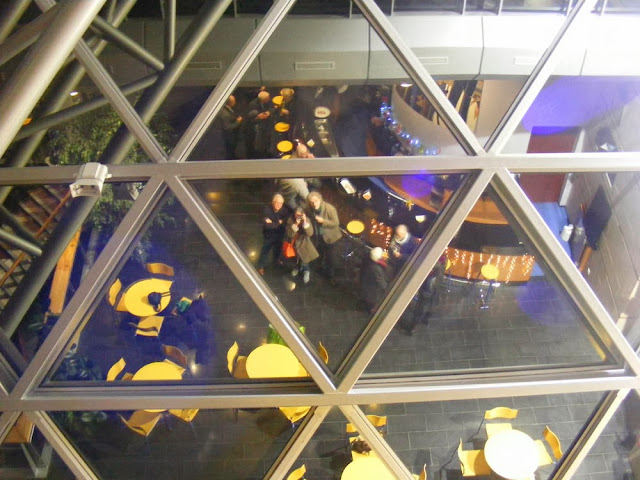 I took this fun photo in the bar after the lectures had finished. You can see me (with the orange bag), Simon to my left and John to my right. Our friend Jean Louis is obscured by the horizontal frame above us and Dan just visible above that.

After apéros at the bar in the Cité de l'Or we went back to Dan and Marie Christine's for supper. They live in a restored longere in a hamlet not far from Saint Amand. We were full of admiration for their work on the house. They actually mostly live in the barn end of the building, which has a sort of suspended staircase up to a mezzanine for the bedrooms and more or less open plan kitchen / living room on the ground floor, with a huge glass portico flooding the space with light.

On the table was a selection of charcuterie including wild boar paté made by Dan from a boar which had visited their vegetable garden once too often, some petit salé and garlic sausage from a butcher that Marie Christine trusts and sour dough bread from a real artisanal baker who has turned his back on the big city and now runs his wood fired oven just three times a week to make something exceptional. Then there was salad and sautéed potatoes, followed by several cheeses and then an apple tart made by Marie Christine from their own apples. Accompanying all of this was a selection of local wines, Dan's home made firewater (which he told us was eau de vie des mirabelles, a type of small plum) and some limited edition Chartreuse supplied by Pierre, who is a stone mason who used to work for the monks. We were joined by Pierre's entertaining young bearded collie Yuko, who was enjoying having a crowd of visitors and spent the evening being told to 'saute pas!'

What with laughing, talking, eating and looking at photos of Dan and Marie Christine's trip to Australia we didn't get to bed until 3 am.

According to the latest council meeting minutes, displayed on the town notice board, our water rates are not going to go up next year, but our sewerage rates are being reviewed.
Posted by Susan at 09:00

Email ThisBlogThis!Share to TwitterShare to FacebookShare to Pinterest
Labels: Events, Food and Drink, Further Afield, The Car and Driving

Sounds a great day!
Love the "outside looking in" self portrait......
even if you have gone all coy and are covering your face!!

Eau de vie des mirabelles is powerful stuff... unknown ABV of the bottle that Richard gave us from his distillation meant careful trying...
a ten to one ratio of water to alchol was needed before you could...
[A] drink it safely...
[B] get a hint of mirabelle plums....
I reckon you could fly a rocket on the stuff!!!!
!!

I keep my fingers crossed, toes and all, for the Chapelle de Tous les Saints.

Good news, then on the chapel...fingers crossed for funding.
Your day out sounds such fun - even if you missed the haggis.