The Situation in Australia:
There are currently around 30 sections of road in New South Wales that are monitored by Average Speed Cameras. Their principal targets are heavy vehicles on rural roads. Heavy vehicles make up only 3% of vehicle numbers and only 7% of total kilometres travelled, but they are involved in 35% of fatal accidents. Surveys have shown that about half of all heavy vehicles habitually exceed the speed limit. 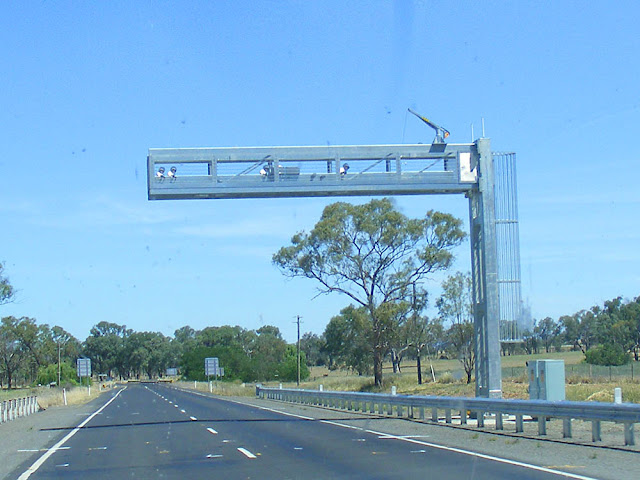 The cameras work by photographing vehicles as they pass under two camera booms set a known distance apart. Each photograph is registered with the time and so a calculation of average speed can be made. Drivers caught speeding are dealt with according to previously existing speeding laws, plus they lose an extra point from their licence, as 'offences detected by point-to-point enforcement demonstrates a continued intention to speed'. Speeding penalties range from the loss of one point and a fine of AUD$105 if you are caught doing up to 10kmph over the limit, to licence disqualification for 6 months and a fine of AUD$3740 for exceeding the limit by 45kmph. Penalties for heavy vehicles are more severe than for cars and penalties for speeding offences in school zones are also more severe. Any speeding offence results in a 3 month suspension for learners and those who have held a licence for less than a year. If you are caught doing 45kmph over the speed limit the police can confiscate and suspend your licence on the spot.

The Situation in France:
There are thousands of speed cameras on roads in France, and since 2011, no signs warning you that you are approaching one. Average Speed cameras are also increasingly being installed on motorways. Also increasingly common are panels which show your speed as you approach in coloured lights. Often they give you a smiley face if you are within the speed limit, and corny as it sounds, this feedback is remarkably effective.

If you are caught by mobile radar, French speeding fines are generally payable on the spot. If you are caught by a camera, the fine will be posted to you. For serious offences (exceeding the speed limit by more than 50kmph) the police will confiscate your licence and impound the car. You lose your licence for 3 years and if it is a first offence the fine is €1500 or €3750 if a second.

Chateau Gaudrelle, right on the river Loire in Rochecorbon, just outside Tours and in the Vouvray AOC is hosting open days this weekend and next, with special offers on the wine and an exhibition of paintings and photographs.

Domaine du Clos Roussely, based in Angé (just across the river from Montrichard) in the Touraine AOC are going to be at the Salon Les Vins du Coin in Blois this weekend, held in the Espace Jorge Semprun from 10 am to 7 pm today and tomorrow.

Veggie Burgers with tomato salsa and green salad. They turned out rather well and are ever so healthy. I reckon the burger mixture might make a good stuffing for cabbage rolls too, so I will try that some day.
Posted by Susan at 09:00

Soupe aux poireaux et pommes de terre is a well loved classic in France, probably, as you say, because other combinations are not as good. There are so many nice ways to use leeks. Tarte aux poireaux, flamiche in northern France, is one of my favorites.

"this feedback is remarkably effective..."
IMO they should be everywhere...
I drive looking at the road, not the speedo...
The Citroen C4 has a heads-up, digital display with 6cm high numbers... you can see it clearly and have no excuse to speed.

But, there is a problem with them and the 2CVs...
I've had the one in Abilly [from Descartes way] read over 70, then around 30, then in the 50s...
in quick succession...
on many an occasion!
And strange readings from others, as well, but never as extreme!

The grey '56 CAN'T DO over seventy on the flat!!
It needs a long, long downhill run....
with the wind behind to get the needle anywhere between 70 and 80! kph!!

And the red one wouldn't manage that between the junction and the town unless I really, really pushed it!!!
And at the price of petrol in France... I don't!!

And, you cannot accelerate and decelerate a 2CV like that...
they aren't performance cars!!

I think it is the effect of the flat, almost vertical windscreen... and the ODD shaped front end...
the internal radar doesn't know what to read from the multiple feedbacks...
it evens out the closer I get!.

Also....
The first of the averaging radars has just been installed in Indre-et-Loire on the D952 between Vernou-sur-Brenne and Noizay... it was in Friday 8th November NovelRepubliK.