Corrugated iron is an Australian icon in my opinion. I love it. For much of my life in Australia I lived in houses with corrugated iron roofs. One of the things I found odd about moving to London was living in a house with a tile roof -- you couldn't lie in bed and listen to the rain on the roof -- it was virtually silent! Here in France, slate isn't any better. You have to look out the window to know if it is raining or not. 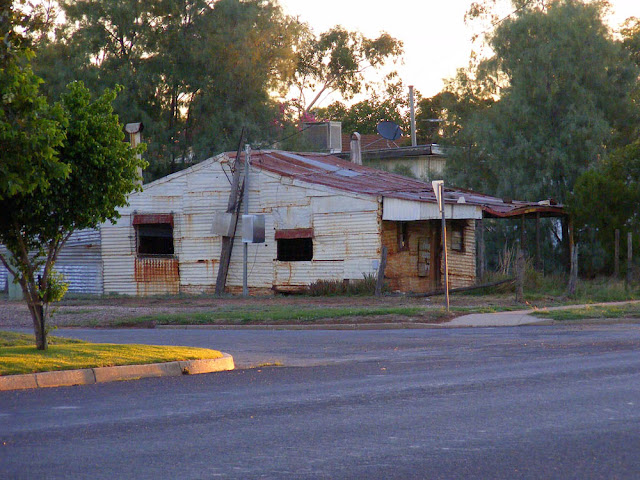 A corrugated iron shanty in the middle of Lightning Ridge, an opal mining town in western Queensland. This rudimentary miner's hut has been kept as a piece of history. 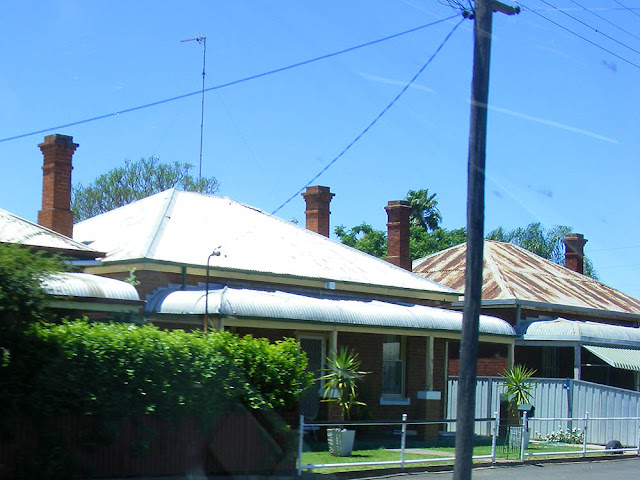 A row of houses in Dubbo, on the New South Wales western plains. They are brick, but with typical corrugated iron roofs, including verandahs with the classic bull-nosed profile. 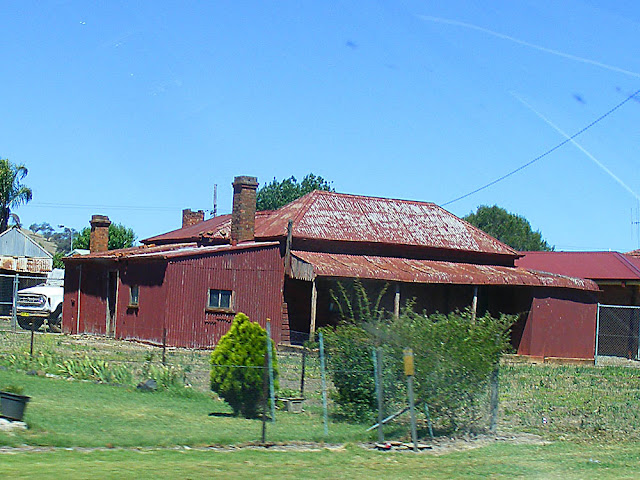 An old weatherboard house in Wellington, western New South Wales, that has been extended with a corrugated iron lean-to. Part of the veranda has also been enclosed, a very common approach to enlarging these old homes. The colour on the iron is not rust for the most part, but a thoroughly unattractive but widely used and hard wearing paint in a colour known as 'mission brown'. 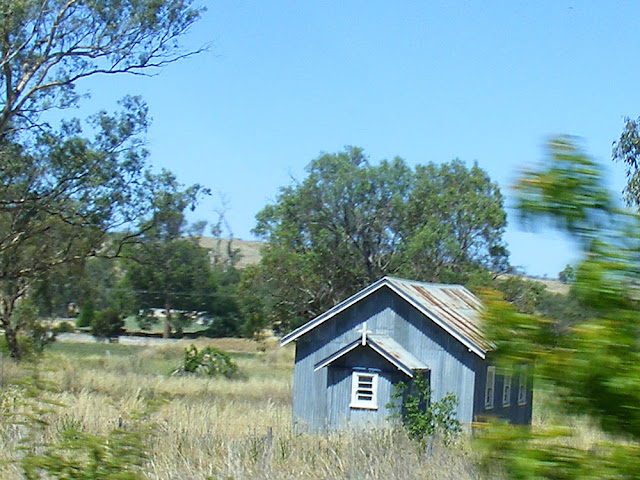 A la maison hier: Simon worked on mouse and draught proofing the pantry. The bottom portion of one wall runs along the vide sanitaire (ventilation space) of the graineterie (granary), so has just been roughly infilled in the past, with plenty of crevices and a great void behind.
******************************************************
Au jardin hier: I planted yellow Stuttgarter onion sets and sowed broad beans (long podded feves de Seville). I've grown both before with success, but this is the first time I've tried sowing the broad beans in autumn rather than early spring.
Posted by Susan at 09:00

You should have had the house roof replaced in corrugated tin when you had it done!

It is without a doubt very versatile material. As you have shown, you can build anything with it. And it comes in many shades of rust!

Susan, the house I grew up in, in North Carolina, had (and still has) a sheet metal roof. My mother lived there for 54 years. I loved the sound of the rain too. The house was built in 1910. Wait, here's a link to a photo of it and two other, similar, houses.

Do you know that the Preview button on your comments page doesn't work? At least, it doesn't work on my computer.

Yep, I know what you mean!!
When I started in forestry, we were based each day in an ex-war time Nissen hut on the estate...
one day it hailed, hard....
I was "deaf" for about two hours after it stopped [these were the days before everyone wore ear defenders]... the only other time I was that "deaf" was after a Slade concert!!

Yes, there are sounds associated with corrugated iron that are almost musical, too.... the sound of a loose sheet rattling in the wind... the drumming of the whole roof in certain winds...

Ken: Those houses could be in certain parts of New South Wales! Preview works for me -- more or less (which might just be Firefox fighting with something designed for IE).

Tim: so we should have kept the hangar over the courtyard even though it was pas joli?

I like corrugated roofs. They have them all over the tropics and Africa. They make some really nice green ones now a days.
(Have you ever heard of Nancy Wake, "the white mouse".? Deborah Lawrenson wrote a blog post about her today. I thought you might enjoy this fascinating story).
http://deborah-lawrenson.blogspot.com/2013/11/nancy-wake-white-mouse.html

We had a metal roof on our house
in New England. When the snow
melted, chunks of it would slide
off making a "zip" sound as it
went. Then you'd hear a thunk as
it hit the ground. Good luck with
the broad beans.

Nadege: Thanks for the link. I know about Nancy Wake and will read this with interest.

Sheila: the only house in Australia I've lived in where it snowed had a tile roof, so I've not had the delights of snow on a metal roof.

This is corrugated iron roof country too...can't hear yourself think when there's a downpour....

I used to sow broad beans over winter....then one year mice - or similar - ate the lot so then I sowed them in pots, kept them in the conservatory and planted them out when hardened off in spring.
I grew Seville Longpod, I think, but a French friend gave me some white seeded broad beans which were distinctly prolific.

"...so we should have kept the hangar over the courtyard..."

Possibly... it has saved the washing getting a second "acid" rinse on a number of occasions, when Pauline has heard the start and we've dashed out the front on a rescue mission!

I can't hear rain noise through the double glazing... but I can hear the much deeeeeeper, wind induced thrum!

Bravo with the onions and broad beans! It's a serious activity at about 5 degrees C in that wind. I've had some success with Aquadulce Claudia beans sown in autumn - trying Aquadulce Longpod this year. Onions still to go though. Let's hope we get a dry spell.

Fly: I don't have anywhere inside that is suitable for raising seedlings, plus I don't fuss with them enough, so they are never successful.