Most people, when they arrive in France, have enough French to negotiate shopping quite adequately. Je voudrais ('I would like') followed by reading the name of the item off the label and pointing will get you what you want most of the time. The trickiest bits of the transaction are remembering to say bonjour before making your request and working out how much it is if you have bought multiple items and there isn't a cash register readout to take a sneaky peak at. 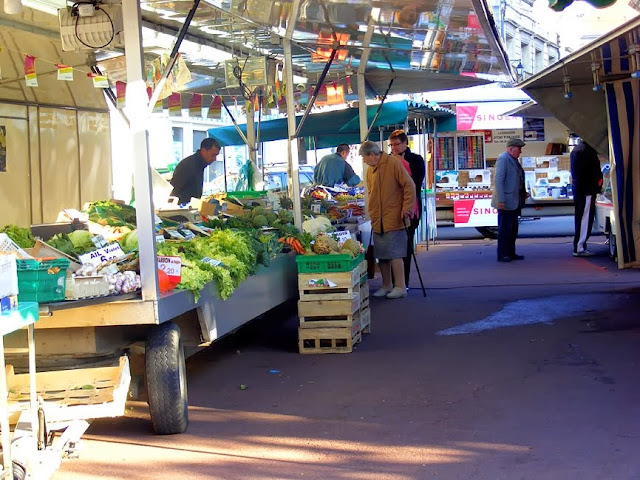 Fairly soon, especially if you live here, you realise that shopkeepers and market stallholders are asking you questions too. Usually these questions are easy to get the gist of because of the context, but what are they actually saying? 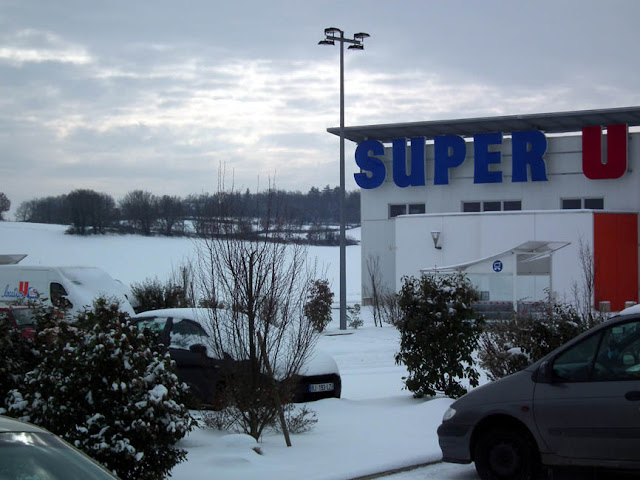 And then there is the question of how to pronounce the names of the supermarkets. Here is my take on it:
UPDATE: See Ken's comments below for expert instructions on how to pronounce these words (stresses, such as they are, should be on the last syllable, for example).

Luckily, shop talk was one of the few useful lessons in our French language evening course last winter and it certainly helped us to communicate more sensibly with shop keepers.
As you say, it sounds like nonsense until you work it out.
I can understand why many non-French speakers opt for the supermarkets as the easy option, only having to say bonjour, merci and au revour to the person on the till!

Another thing to watch for is the use of livres instead of kilos. Or maybe that's peculiar to "la France profonde" as a neighbour referred to his native village! P.

Okay, that's not clear, I'm sure. But Auchan is as you say, oh-SHÃ, with the French nasal A at the end. And the final N is not pronounced at all. In French, a nasal vowel like Ã is never followed by a nasal consonant like N. In English, we have a lot of nasal vowels, but they are always followed by a nasal consonant like N or M. The English vowel is only nasalized because the following consonant is.

Carrefour follows the syllable stress rule. It's [kahr-FOOR], with the second syllable being longer or stressed as compared to the first. Both syllables have the French R, of course. But it's not [KAHR-foor].

Same with Intermarché. The stressed or longest syllable is the last one, not the first one. SuperU is hard to transcribe because we just don't have the French U sound in English. It's certainly not -oo-. But there's no accurate way to transcribe it, just the same you you can transacribe the uvular French R. Leclerc is as you say, with the French R at the end (there is no other French R, phonemically speaking).

French really doesn't have tonic stress or syllable stress at the word level the way Engish does. Wikipedia says: "French has no lexical stress at all: instead, prosodic stress ... is placed on the final syllable (or, if that is a schwa [mute E], the next-to-final syllable) of a string of words, which may be equivalent to a clause or a phrase. When a word is said alone, its last syllable is also the end of the phrase, so the stress is placed there."

Sorry to be so technical. Nice post you did.

All this is why I think it is so important to listen to, even study, French popular music if you want to improve your spoken French. From it you learn how the language sounds now, where syllables are stressed, what rhymes with what, and so on. And because it's poetry, it's easier to learn and memorize than prose is.

Tim, people in the markets in Paris also measure things by 'la livre' (500 grammes) in the markets. 'Une livre de beurre' etc. Be careful, because it's not 'le livre', the word for 'book'.

Jean: we did shopping in class too, but I don't remember it being terribly useful on what the shopkeeper might say to you, only what you said to them.

Ken: thanks for the techie stuff. I kind of get it. I'll add an update just saying to read your comment rather than amend the post word by word. You make a good point about the rhymes.

I think the 'imaginary n' is something that English speakers may do naturally to nasalise French vowels ie where you pronounce it in your head, but not out loud and it has the effect of nasalising the preceding vowel. Both Simon and I do it and hit upon it as a technique independently from one another.

With regard to the French 'u' and 'ou' sounds there isn't much choice but to represent them both in English as 'oo'. I now have much less trouble with the 'u' sound in French since I did some US Foreign Office French phonetics exercises. I still can't get my 'ou' round enough though.

Susan,
for the inevitable missed amount because of no visible readout, our teacher told us to concentrate on trying to hear the BIG amount and hand over more... in notes... even if we've got the shrapnel.

My Favourite Expression...
"Bonjour, pouvez-vous m'aider, svp!"
Gets both attention and help... especially in the bricos.

Among the expats of my area Leclerc was rendered as Leclerk by thse who held themselves proficient in French and otherwise as Electric.
Perhaps the customer service had given them a shock....

There was also a chain of supermarkets called 'Le Mutant' in the area......

Whenever I drive past LeClerc I can't help but think "It is I...". I have even said to Susan: "I must go in to It is I" and she has known what I meant.

Ah, but do you say it only wernce?

(Guess what's re-running to fill the afternoon schedule on BBC2 at the moment....)

I think that that Allo Allo TV series is one of the British expats' biggest obstacles when it comes to taking life in France seriously. I mean we had Hogan's Heroes on TV in the U.S., but it was obviously a kind of silly exercise in demeaning an enemy culture. Is that what Allo Allo was about? There really is an arrogance on display where it comes to the British view of other cultures, especially the French. Why is it that people from across the channel want to come live in such a ridiculous country as France?

Ken: I used to think that Allo Allo was the most ridiculous program and why would anyone watch it. It wasn't until we moved to France that I actually got it. It was clear then that it was written by someone who was an Anglo who had experienced speaking French in France. The program pokes fun at the way Anglo's mangle French vowel sounds in a way that is really close to the bone when you are an Anglo in France.

However, I know what you mean about the casual denigration of the French and all things French by the Brits. I find that intensely irritating.