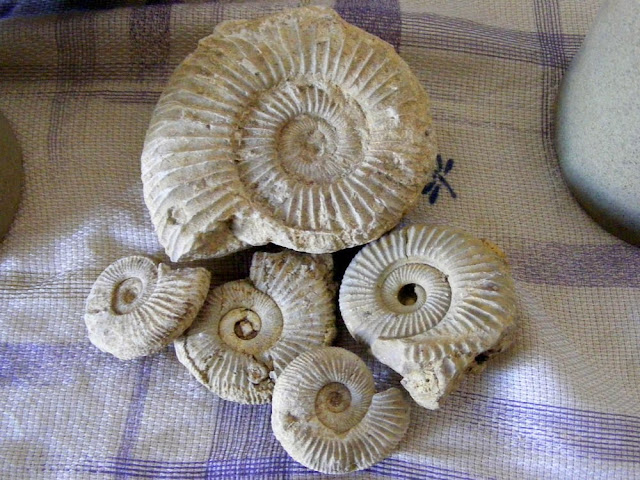 A couple of months ago I was walking down the street on my way back from paying a bill at the plumber's. Two women were chatting on a doorstep a few houses from where I was and when they noticed me one of them greeted me by name. It turns out I was passing Claudine and Dominique's house. Although I knew them from the local history society, where we are all members, I had never been to their house. Claudine invited me in and they showed me around.

At one stage I admired a large ammonite resting on the fireplace and Dominique asked me if I liked fossils. I said 'yes' and he said 'come with me!' We went out into the courtyard and he rummaged around in a cardboard box sitting next to the wheelie bin, then handed me these five little ammonites as a gift. I was thrilled!

They came from Poitou, the area to the south-west of us. Our friend Charles, who has a fragment of a very large ammonite on his winery tasting bar, says that they are typical of the ammonites from Poitou. The ones like his, found the Touraine, are much bigger and it reflects the difference in the ancient sea bed in the two areas and the creatures that were living there.

*************************************************************
Vets on Strike: Yesterday our local vet, and presumably hundreds of vets all over the country were on strike, for the first time in 40 years. 'Do you really want a world without vets' read the strapline on the notice on our vet's surgery window, inviting everyone to sign the petion at www.stop-marisol-touraine.com. Marisol Touraine is the Health Minister, and a local girl. She has presented a new bill to parliament which includes a paragraph which would have allowed vets to prescribe antibiotics to treat animals, but not to sell them. Only pharmacies would be able to sell them. Her aim is to reduce the possibility of resistance to antibiotics. The vets' argument is that it slows treatment down and/or makes it less effective. They appear to perceive some sort of threat to their profession in terms of how many practicing vets there will be in an area as well and despite the paragraph about antibiotics being removed from the law when it is re-presented to parliament on 13 November, the vets decided to stage the strike anyway, to show they were on the defensive.

Email ThisBlogThis!Share to TwitterShare to FacebookShare to Pinterest
Labels: nature and wildlife, Prehistory

Susan, that is definately the way to use the white onions...
I "convinced" Pauline we should plant some...
every single one bolted!!
They don't overwinter well.
Nor do the reds, like Electric or Red Baron.

For ordinary bunions we would wreck-or-mend Stutgarter [in any of its forms] or Sturon for winter planting...
big flat and good keepers, both.

In fact, I entered one Sturon two years running for the "Best Dressed Onion" competition in our allotment show...
he was wearing top hat and tails...
but the actual onion didn't shrink in two years...
it is the only onion we've ever had that has been able to last that long...
we usually run out!

Have you seen our "inherited" ammonite chunk...
I think it was used as a doorstop after it was found in the fields.
What we get here most are sponges and "devil's toenails".

Tim: I wanted Stuttgarter. That's what I've planted in the past and they are great, but they didn't have any, only one red and one white variety.

A la cuisine hier...
I wonder if early (wo)man did something similar...
I'll bet she did!
May not have had the heat, tho'.

In the last recipe it mentions cayenne or paprika as a substitute for piment d'Espellete....
I presume they mean Spanish Smoked Hot Paprika like Pimenton "El Angel" Picante... halfway between Paprika and Cayenne on the Scoville scale...
but gives a wonderful, rich flavour.

Susan, you should go to the other Gamm Verts or the nursery beyond SuperU in Descartes [they have a very good selection!]... as does the Bricomarché by the Intermarché at St. Maure... in the building that is beyond the outdoor gardening stuff...
that is the best place for jam jar and preserving jar lids, too.
The Jardilands also carry a very good range of bunions and that's-ya-lots...

Actually, I am worried abot the Prooly Gamm Vert...
it is beginning to look very much like our very small Big Mat in GP...
just before it closed!!
Keeps running out of normal things very fast... strangely empty shelves... etc.
It is our nearest, too.

I suspect the vets would lose a little income if they were not able to dispense antibiotics themselves.
Personally I would prefer to get the medication there and then, rather than have to visit a pharmacy. It was fast treatment from the vet at Preuilly, on a Saturday afternoon, that almost certainly saved Lulu"s leg, if not her life, when she was bitten by another dog when she was only a puppy. I don't blame the vets for being annoyed at the prospect of losing income, and affecting the profitability of a practice. I also don't see how it would reduce the use of antibiotics, it would just shift the supply to the pharmacists - I can't imagine a pharmacist refusing to dispense a prescription.

I side with the vets...you get the treatment started faster....


There's a super fossil site at Thouars if you are ever over that way.

Fly: so do I. I thought the rationale behind the new proposed law was poorly thought out (sadly typical of this floundering government), as well as endangering animals that need treatment immediately. What did raise my eyebrows was the vets' decision to go on strike even though they had won already.