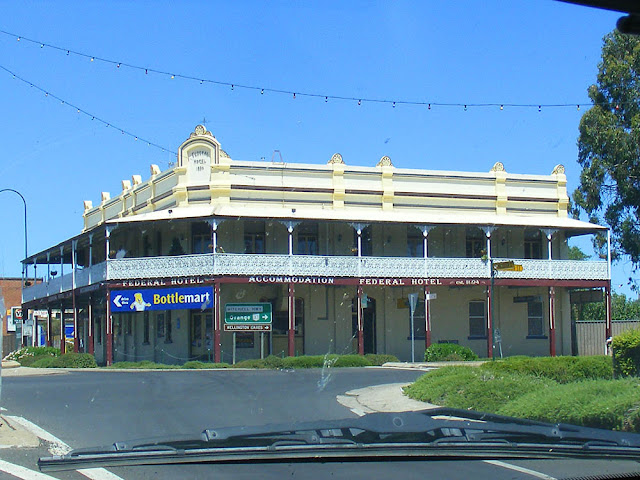 This is the image most Australians would conjure up if you asked them to describe a typical Australian pub. It's 19th century, with cast iron lace around its upper veranda, cast iron posts creating a colonnade underneath. It's large and imposing on the outside, dark and cool on the inside.

This particular pub is in Wellington, in western New South Wales. I assume it has not always been called the Federal Hotel, as Federation (of the separate self-governing British colonies to form one independent nation) only occurred in 1901, and the date on the facade says 1894. Perhaps I am wrong though, and the original owners were expressing their solidarity with the emerging nationalist movement.
Posted by Susan at 09:00

Shame about the "Bottlemart" advert spoiling such a wonderful example of the use of Victorian "plastic"!
I hope it is listed!!
Most of the UK examples were torn down in the war for "re-use" in the war effort...
much of it then dumped in Scapa Flow...
from where it is now extracted as non-contaminated metal for radio-active measurement.

And I see from their website...
when you go into the bar to order food...
you end up eating in a 'bra'!!
[from their website:
Federal Brassiere...
or is that another Aussie term to show that we all speak Manglish!!]

What's the date at the top corner of the building, btw?

The cast iron thing and the general look made me think of New Orleans.

Tim: Fantastic! I hadn't picked that up on the website :-) The date is 1894. I'd be surprised if it is listed. It's a fairly ordinary example of something that is found all over Australia. Some of the really special ones are listed, but not many I think.

chm: probably much the same age.

Although a young country in comparison to Europe, Australia is heritage listing some of its fine examples of architecture. Georgian,Victorian, Edwardian, Federation (my favorite),
Art Deco and more recent forms are preserved.
During the 60s we did lose some of our fine architecture. Tasmania with Hobart and Launceston have retained some great buildings and wandering the streets around the back blocks in Sydney will delight those on foot.

That upper veranda looks like
a wonderful spot to sit and
sip a brew when the weather's
good.

Sheila: the verandahs in these buildings are rarely used like that. They are basically just a corridor for the bedrooms. The drinking is done either inside on the ground floor or in a beer garden out the back.

It looks just the place for the England cricketers to drown their sorrows...or themselves....

Fly: are they losing? I genuinely thought the Australians were losing, but sports news and me don't connect very often.

I have a lovely painting of one of those hotels in Brisbane (now no longer standing) with a jacaranda in front. My aunt owned one in Armidale once but it no longer exists either! Unforunately many have been burnt down or replaced with more modern buildings which is such a pity. Those upstairs verandahs are so cool in the summer.

Fraussie: is your painting of the Bellevue? Do you know the story of why it isn't there any more?