I've delayed posting these photos of the Indre river at Azay-le-Rideau because we wanted to show the spring 2011 counterpoint photos. A week ago the water was swirling and raging through Azay-le-Rideau, churning over the weir by the bridge. 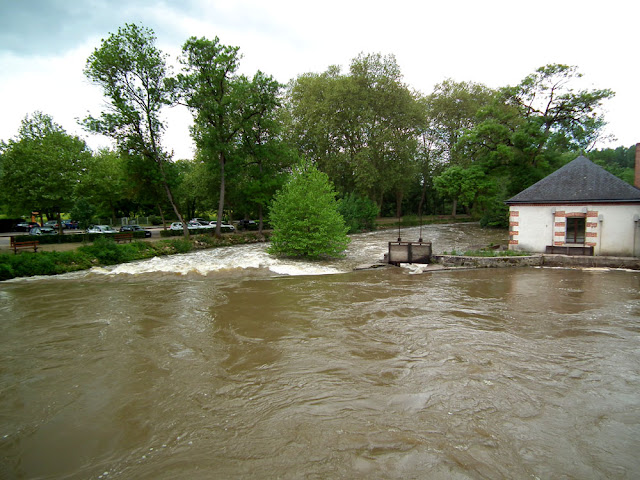 This time two years ago, you could easily have walked across the weir without getting you feet wet, but you will have to trust me on that. I cannot find the photos, even after several hours of increasingly frustrated searching. 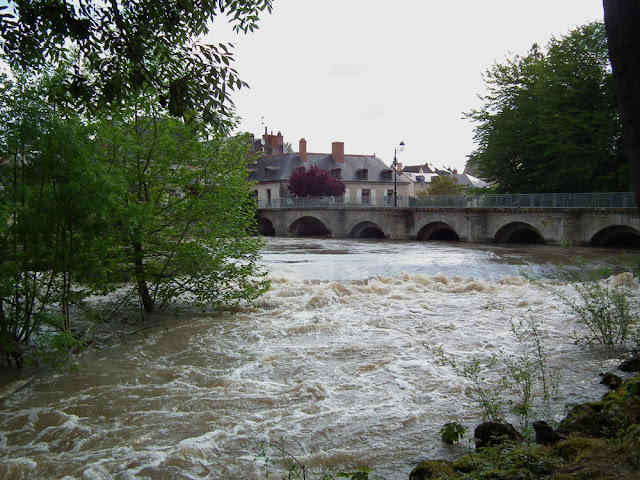 It seems to us that the water is exceptionally high, but in fact the levels are coming nowhere near the flood markers from past years. If you are in Azay-le-Rideau, stand on the bridge and check out the flood markers on the boathouse steps. The water has been at least a metre higher in the past, and significantly higher that it is now on at least half a dozen occasions.

Update: Colin has sent me a link to his blog with a photo of the weir completely exposed.
Posted by Susan at 09:00

Yes and Elizabeth walked it.... We blogged about it here. There are a coule of pics if you want to use one... http://inandaroundbraye.blogspot.co.uk/2011/03/azay-le-rideau.html

All we have is photos of the raging water in December 2011 [posted about it] which look to be at more or less the same level.

Flood levels for Chatellerault / Chateauneuf can be seen near the ice rink. I wonder if those flood levels would have been before the control of the weirs? In my lifetime in this region I have seen the Vienne extremely flooded. The Gartempe and the Anglin have not flooded as much this year as in the past.

Colin: I'll update with a link to your blog -- that's exactly the sort of photo I was looking for.

RiF: Yes, the flooding isn't so bad, and there is less standing water, but the quantity of water and the flow in even the small rivers is much greater than usual for this time of year.