All through the grass on the limestone slopes in this area you see rather unusually shaped bright blue little flowers from late spring onwards. The individual flowers are made up of two gentian blue sticky out 'ears' either side of a paler toothy tube.


A typical rosette of Chalk Milkwort,
nicely shown off against the chalky soil. 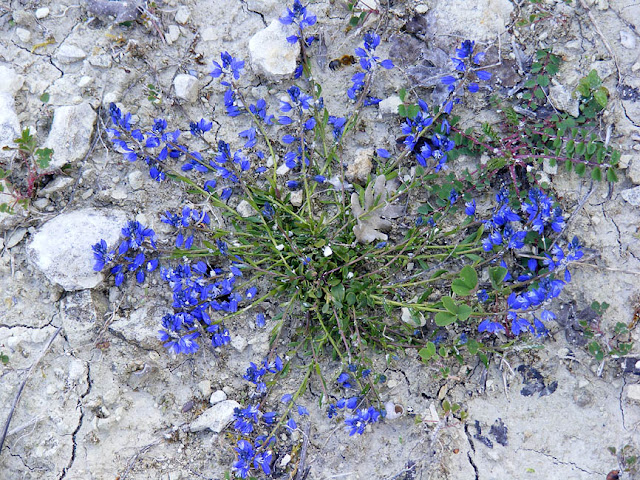 They belong to Chalk Milkwort Polygala calcarea, a plant that only grows in these short calcareous grasslands. Common Milkwort grows on banks and on woodland fringes here too, but is a paler blue or quite often mauve or sometimes white.


A detail of the same plant. 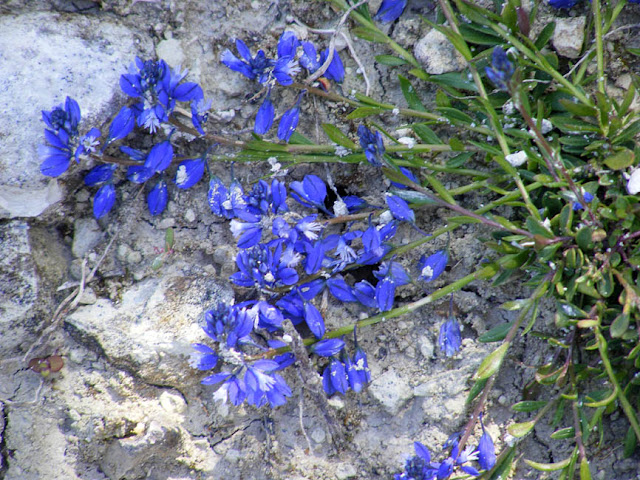 The Milkworts are so called because they had a reputation for enhancing milk production in nursing mothers. All the internet references say the plant was used by women who wanted to increase their milk supply, but when I mentioned this therapeutic use to a French botanist friend he was quick to point out that there was a crucial difference in the French traditional use. It is for goats, not for people! All the local cheeses here are made from goats' milk, and the goats would traditionally have grazed on the limestone slopes too steep for ploughing. In the course of their grazing they would happily have eaten the Milkwort as part of their naturally herb and flower rich diet.

Presumably the witches...
sorry....
the herbalists...
that used to prescribe it had verbal records that it increased milk production...
based on hearsay from those that had used it...
after watching their nursing animals that were grazing it....
and had tried some when nursing???

Oh...
having seen your pix of the "black" flowerbeds the other day...
and fallen in love with that black elder...
I bought one yesterday!!

If you look back at Ameliafrenchgarden's latest entry, you will see that....
following having a tree dropped on me...
the Milkworts were one of the groups of flowers that got me interested in botanizing.....
specifically, where I happened to be most, Common and Heath.

Tim: Those black elders are really striking looking, aren't they.

I remember you saying you were interested in milkwort because it was within your field of vision while you recovered.

Yes, it was seeing all those tiny little flowers that I'd been treading on whilst birdwatching... and then I noticed the lichens!!