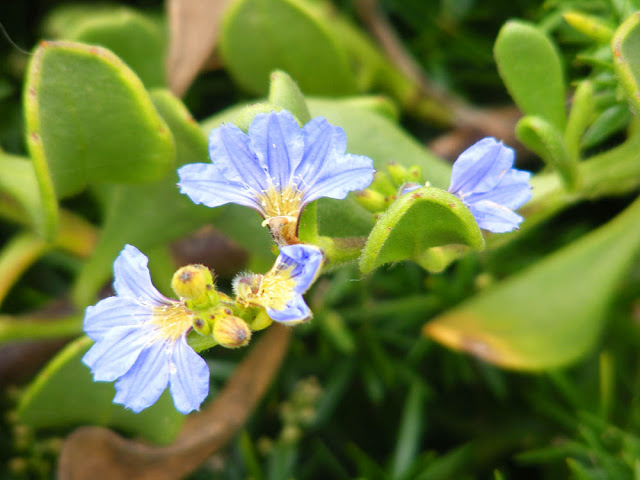 This pretty blue flower, called Dune Fan Flower Scaevola calendulacea, grows on coastal sand dunes from South Australia right up to north Queensland. It should be part of a colourful complex that includes grey green Dune Spinifex grass Spinifex seraceus, yellow Guinea Flower Hibbertia scandens and bright purply pink Pigface Carpobrotus spp, which grow together in the sand, acting to stabilise and bind the shifting grains. Sadly, it and its indigenous companions are being pushed out by vigorous interlopers such as Beach Pennywort Hydrocotyle bonariensis from America and Ground Asparagus Fern Asparagus aethiopicus 'Sprengeri' from Africa. 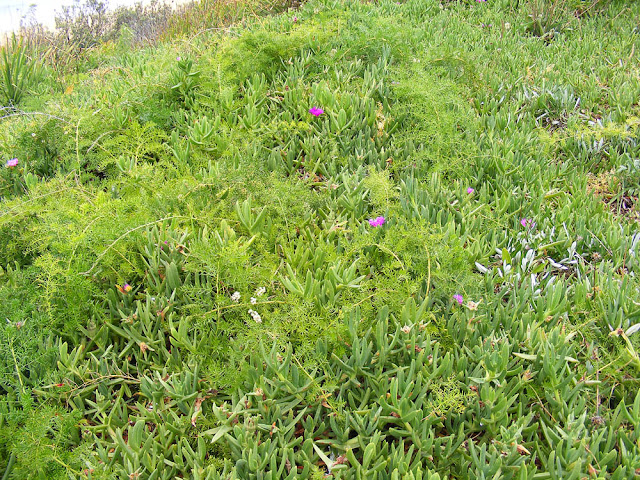 Native Pigface (with the succulent leaves and shocking pink flowers) being swallowed up by triffiding Ground Asparagus Fern.

These non-native species are often capable of holding more sand than the native plants, resulting in the dunes getting steeper and altering the shape, behaviour and access to the sea of coastal lakes. Ground Asparagus Fern, forms a dense matrix of rhizomes, blocking out any other plant. It is considered such a problem in certain areas of New South Wales that it is illegal to propagate, sell, or even give it away. The problem is that birds eat and transport the seeds, spreading the plant widely. Rather alarmingly, the current government recommended control method is to saturate the plant with diesel!

Love the Fan Flower... not only one of Nature's "True Blues", but an attractive flower in its own right.