The Slates are on the Roof Here

Those who live south of Tours and habitually travel up the D50, via Ligueil, to get to the city will know this place. It is where you turn right at the lights to get on the old Route Nationale (now the D910) at Veigné. (Anyone who relies on Google Maps for directions will now have no idea where I'm talking about, as convincing Google Maps to take the route that everyone actually uses here is nigh on impossible.) 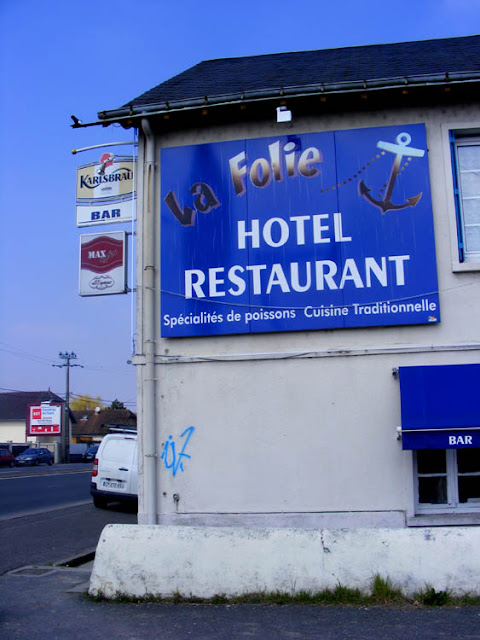 La Folie is a prime example of the 'if there is a crowd of white vans outside, that's the best place to have lunch' principle. Between 12 noon and 1.30 pm, there is always a crowd of white vans, whose drivers are inside partaking of no frills, good value food. The starter is a buffet of salads and charcuterie, there is a daily changing choice of three main courses, cheese and half a dozen classic or seasonal desserts, for €11.50. Wine is included, coffee is extra.

Inside the restaurant there is a roof slate hanging on a post. Written in chalk on it is the message 'Ici à la Folie, les ardoises sont sur le toit' (literally, 'Here at the Folly, the slates are on the roof'). It's a slightly cryptic way of saying 'Please do not ask for credit as refusal often offends'. I would have liked to take a photo, but didn't want to seem too weird and foreign, so I didn't. It occurred to me that the slate could send another message too -- 'here at the Folly we don't go in for poncy food presentation.'
Posted by Susan at 09:00

I liked the slate....far less blunt that the 'No tick' notice over the bar of my local in the U.K.

had the chance to experience many of these lunches on our travels.
eat where the HiVis guys eat was a motto we tell friends back home.

Fly: I liked it as well -- much more charm than the usual message.

L&S: it's definitely the way to go.