Preuilly is blessed with an excellent butcher, who I use regularly. A few weeks ago I bought two chicken legs from him for our dinner. I asked for deux pattes de poulet, just as I had heard an old lady doing a week earlier. Just as he had done with the old lady, the butcher repeated the request as deux cuisses de poulet. Whole chicken legs are usually referred to as cuisses, even though the word actually means thigh. Pattes de poulet makes more sense (chicken legs) except that pattes is frequently used to just mean feet. In fact, when I overheard the old lady, I was intrigued, because I assumed she was buying chicken feet. The butcher got out a new waxed cardboard box and opened it up to get her order -- deux cuisses de poulet. 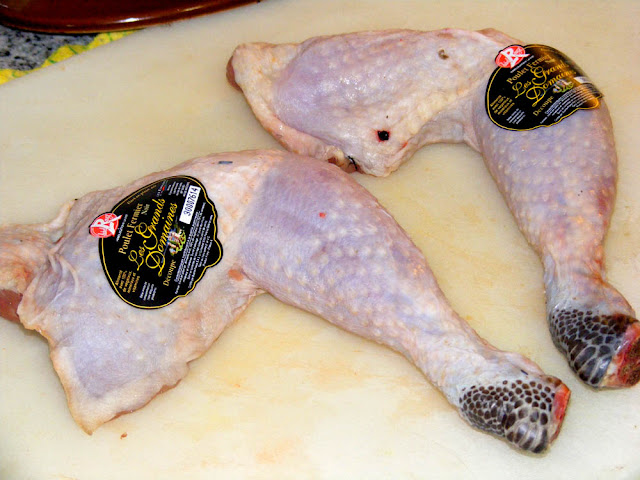 Whether they are pattes or cuisses, they are a top notch product. They are Label Rouge, a trusted French quality accreditation system, and are black farm raised chickens from the Loire Valley. Not the famous Dame Noire or Géline de Touraine breed, but I think very like. The meat is as dark as duck and the drumsticks have vestiges of the black feathers. On the label it tells you that the chicken has been raised on the farm in the open air and killed at a minimum of 81 days old. Its origins are traceable up to the point of sale, and each piece is numbered. Two legs weighed 570 g and cost me €5.42 (at €9.50 / kg). They did two meals for two. 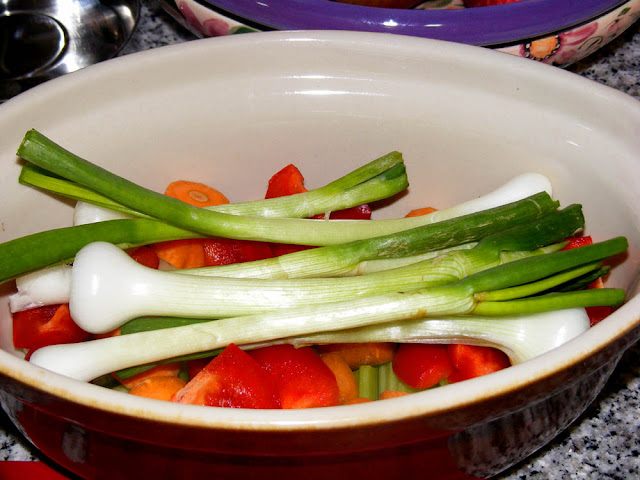 And in case you are wondering how I cooked them, they were marinated in soy sauce, pineapple juice, ginger and garlic then slow cooked in the oven over a bed of vegetables, with the marinade forming the pot liquor. I served them with buckwheat noodles.

***********************************************
Orchard Update: Yesterday I planted tomato, aubergine, pepper, chilli, celeriac, celery and leek seedlings in the potager. We had two warm sunny days in a row and it seemed like my last opportunity for a while. The bees of all species have been going crazy the last two days. The paulownia was seriously buzzing, as were the gardens of Chenonceau and Cheverny the day before. They obviously think it is their last chance for a while too. I roughly dug part of a new bed, maybe for green beans, and I picked the first few strawberries. It looks like this year will be the strawbs swan song, so I need to be thinking about creating a new bed for new strawberry plants. With the damp weather at the moment I am losing more fruit on them than is ripening enough to pick. The Early Spider and Lady Orchids are coming to an end, starting to look faded and past it. The Bee Orchids are spectacular -- they seem to be a particularly deep pink this year. Still to come, and budding up nicely are the Pyramidal and the Lizards.

Susan, you might enjoy this site, Beurk.com, and its article about pattes de poulet. « Beurk » means "yuck" in French.

It never occurred to me the fowl were black because yellow chicken depends on what they eat! My city origins always come out :).
I'm interested to hear you have strawberries already. I don't eat them myself but a colleague gave some to JM and he has a whole plot.
I'm waiting for the raspberries!
The garlic, potatoes and onions have sprouted very nicely, BTW.

When I was in England my butcher always delivered an order of a whole chicken complete with the feet all beautifully cleaned and ready to add to stocks for their gelatinous quality.

When invited to friends' houses in France a roast chicken would be served with the head, comb separate, and the kidneys...but these were always chickens from their own basse coeur.

Ken: thanks for the link. Beurk is a lovely expressive word -- I should remember to use it more often :-)

Fraussie: Only a few strawberries yet. I never got to plant the onions and garlic myself :(

Fly: The chickens come with the head on from the poultry man, but I always ask him to cut it off. They don't very often come with feet. I assume leaving the head is a way of verifying what you are eating?