It's Dry in Australia 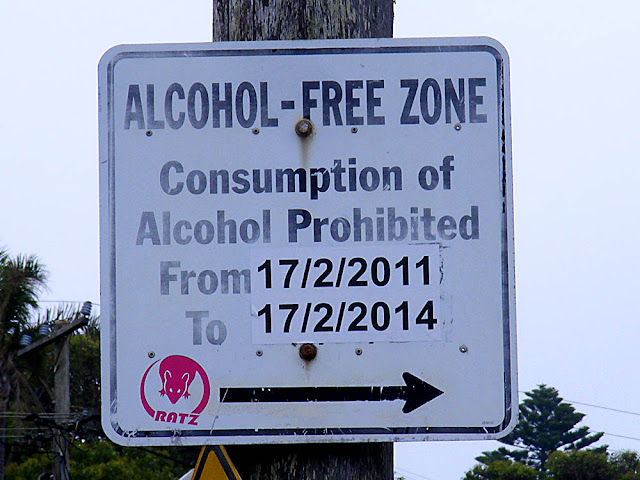 We saw a lot of these sorts of signs on our last visit to Australia. It tells me that many (most?) local authorities are tackling a serious alcohol problem in their communities. The Alcohol Free Zones apply to roads, footpaths and carparks. Similar signs which say 'Alcohol Prohibited Area' apply to parks, recreation spaces, beaches and reserves. In both cases the consumption of alcohol in the designated area is prohibited 24/7. If the police see you with an opened container of alcohol they will tip the alcohol in the gutter and there is an on the spot fine.

The zones are set up in response to police and/or community concerns for the safety of particular areas. The aim is to stop extremes of rowdy behaviour, vandalism and fighting, particularly when there is a crowd of party goers involved.

**********************************************
Orchard News: It seems we did get a frost on Monday night after all. I noticed that the newly emerging leaves on the Chasselas grape are burnt, but nothing else seems touched. I finally managed to plant something in the potager. 23 Stemster seed potatoes have gone in, and I've roughly dug over another bed for some of the plants I'll buy today at the Verneuil plant fair. I hoed a path between the two beds and have sowed some crimson clover as green cover. If the ants don't take the seeds it should be tough enough to cope with being walked on occasionally, and encourage pollinators as well. I'm very pleased to see that the solitary bees have just started to use one of my bee hotels. It's situated in one of the apple trees and it looks like the occupant is a Red Mason Bee Osmia rufa. A second species of orchid, Lady Orchid Orchis purpurea is now flowering amongst the fruit trees and I got some nice photos of a spring colouration Map Araschnia levana butterfly. The first Clubtail Gomphus sp dragonfly of the season fluttered by, but I didn't get a good enough look to identify it to species level. 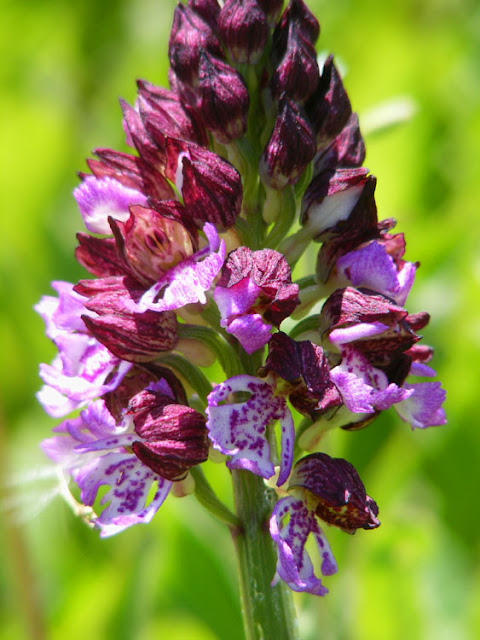 I went to the opthalmologist on Thursday for a check up. I made the appointment in January and 2 May was the earliest I could get in. The fee was €38, of which I suppose I will get about half back. I went because there is a history of various eye conditions in my family, including glaucoma, but I am happy to report I have nothing to worry about yet. The doctor did give me a new lens prescription though, so that will be €600 out of the savings no doubt. France has recently been outed as the most expensive country in the EU to buy glasses, being about a third dearer than anywhere else.
Posted by Susan at 09:00

We lost our courgette plants which I had planted out. Interestingly one variety in the greenhouse also died but the other was OK.

Elizabeth uses Glasses Direct which if you speak to them on the phone will post to France at reasonable cost. They are excellent and cheap.

Sorry to hear about the continuing hay fever, Susan. Walt and I are both feeling a lot better now than a week or so ago. Hope you will be feeling better soon.

As for eyeglasses, I always get mine in the U.S. First of all, my sister is an optician. And then there are those high prices in France. However, I was forced to get new frames here in Saint-Aignan a couple of years ago and they cost only 165€, so I wasn't too unhappy. It's the lenses that cost so much, I think.

Colin: I looked at the Glasses Direct site. Many thanks for the link -- they look excellent. The only problem might be they don't ship varifocals to France, so I'll have to give a UK address. I'll have to ask them about Simon's prescription -- I think his is too strong for them.

Ken: Thanks, glad you are feeling better. I'm just a bit fed up with it going on so long.

I have a feeling my current frames won't be suitable for my new prescription, but I could be wrong.

C&E: Thanks for the glasses info...
Susan: Thanks for that tip-off about varifocals... I'll need to contact my brother...
And did you get your veg today?
It was a very odd layout this year...
Local suppliers, but not from the college... I wonder what will be happening when they move to the new location in Loches?

Susan, my glasses are varifocals and Glasses Direct shipped them to France for me for £10 p&p.

Tim: I thought today was very disappointing. We ran into the wife of a friend at the entrance and she obviously thought so too. I gather there have been some major staff changes, but no idea what the future holds. Will have to make enquiries. We bought 10 toms of mixed varieties and a couple each of abergines, peppers, chillies and zukes from the nice small scale organic lady not in the greenhouse. Dunno when I'm going to get them planted though -- busy week with clients coming up.

Elizabeth: many thanks for that. I was going to ask you about that. Thanks for your very helpful PM.

There was a good article on Vhern-Wheel in a recent copy of Re"neigh"sance Lochoise that outlined the changes and rundown of the chateau prior to sale... and the removal, over three years, of the school/college to a more suitable site at Loches.

Was that the organic stall near the bouncy castle?

Did you see the display by the bee people? Had some good bits... if a bit biased... on Asian Hornet...

My logs are filling fast... the previous favourites, hollow stem, are not yet favoured [I've placed a set right next door to a log to see]....
8 and 10 millimetre holes filling fastest... still only two 6mm filled.

I have visions of forlorn drunks marking 18/2/2014 on their calendars..

Very sorry to hear how poorly you have been and hope you pick up soon.
Have you tried hot milk, honey, cinnamon and rum?
Very soothing for the chest.

Tim: I'm not getting rapid fill on the bee hotels. My positioning is a bit experimental, so I'm not totally surpised.

I forget to buy the RL more often than not, so I missed this piece of news. Who's bought the chateau, do we know?

Didn't see the bee people -- we were in and out because Simon had things to do.

Fly: Sadly for the drunks, the ordnance is likely to be renewed :-)

Thanks for the chest remedy, but I'm not sure I could get it down. I guess it's what you would call a hot posset?