Saché is a picturesque village known for being the country retreat of 19th century French writer Balzac. Much of the tourist focus is on the chateau he stayed in and the sites in the surrounding Indre valley that he made the setting for scenes in his novels.

But Saché has another famous past resident, and a souvenir of his time here is in set in plain view in the middle of the mairie carpark. Recently we stopped here with some art loving American clients. They were astounded to see that it is safe to erect a work by Alexander Calder as a piece of public art in such an out of the way place. The standing mobile is not defaced by grafitti, shot up by rednecks or stolen by scrap metal merchants. 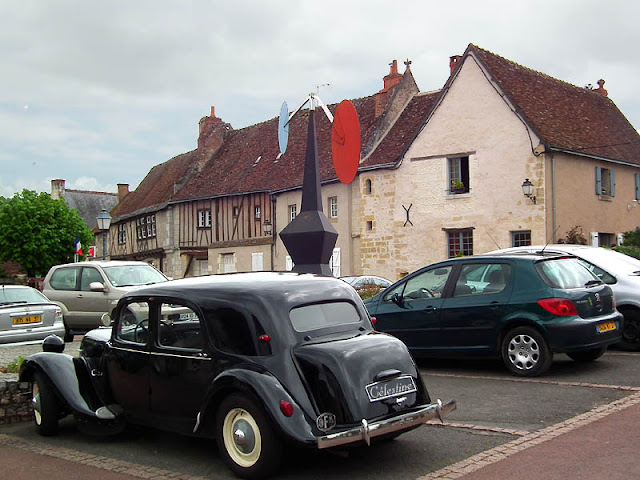 One of the truly wonderful things about France is the abundance of art that you can get right up close to. It is presumed that members of the public will respect the works, and the authorities see it as their responsibility to encourage the arts at all levels. French curators are not keen on ropes and barriers, and there is an expectation that the general public are interested and educated when it comes to viewing art.

American artist Alexander Calder loved Saché and his estate endows a foundation which allows artists to live in his house here and spend three months working whilst supported by the foundation. He had spent the late 1920s and early 1930s in Paris, and later, after he was married, bought a house in Saché. His wife was Louisa James (related to the writer Henry James, who also loved France). By the 1960s he was internationally famous and living in the Touraine full time. During this time he constructed a studio and then a house overlooking the Indre valley. Between them the couple made many of the household objects -- she hooked rugs to his designs and he forged pans and cutlery for the kitchen. He died in 1976, and she 20 years later.
Posted by Susan at 09:00

that is so cool....I didnt know that about Calder

Melinda: I thought it was cool too. I knew about the sculpture, having driven past it any number of times, and I knew Calder had lived in the area, but I didn't know any of the other details. I had to look it up when the clients booked.

I think someone stuck a poster to the vane of the mobile a week or so ago, according to the Nouvelle Republique, possibly the Manif pour tous mob...

PG: I didn't see that. A shame, but it could be worse. I'm guessing that the local authority has guidelines covering how to maintain and repair the work.