A Visit from my Sister and Brother-in-law

We've spent last week with visitors. My sister Kathy and brother-in-law John made a very welcome stop on their European holiday. They've visited before, when the house was still like camping, and got to sleep on an airbed in the pantry. Nowadays we can proudly offer them a comfortable bedroom with adjoining shower room.

Naturally it was a full programme of nature and cultural heritage. They had a hire car so on days when I needed to catch up on admin or gardening, they went off to visit chateaux. But we also had several days out looking at wildlife in general. They are keen birdwatchers, but I am only a casual birder, so the birdwatching was a bit disappointing because I didn't know all the good spots and can't identify LBJs in the tops of trees by their song. Botanically there was lots to see and the butterflies and dragonflies were quite good. Kathy was using a new iPhone app for European butterflies which she found very helpful and generally easy to use.

Kathy at the small étang behind the
Maison du Parc in the Brenne. 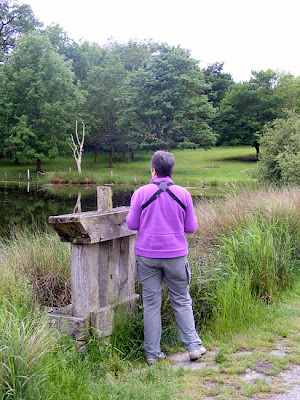 On Monday we began by going to the supermarket - a top destination for any tourist in a foreign country in my opinion. John is coeliac so menu planning for the week needed a bit of thought. (You can read his post about travelling in France here). SuperU is not very good for gluten free products, but I made some bread for him using one of Andrew Whitley's recipes from Bread Matters. I like experimenting with different flours, and gluten free ingredients such as chestnut and buckwheat flours are easily available in French supermarkets, so I had these on hand already.

Kathy walking along the road near a
bank of Carthusian Pinks. 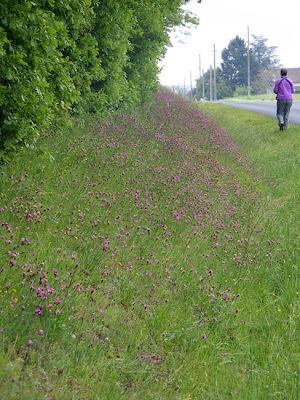 Tuesday I had clients for an orchid walk, kindly referred to me by Sue of La Confiance gites. They were happy to have K&J tag along, and as a bonus I took everyone to a roadside site which is a mass of Carthusian Pinks at the moment, along with quite a few other plants of interest.

John and Kathy birdwatching in the Brenne. 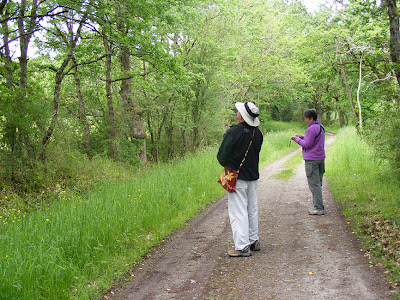 Wednesday was full on nature and we went to the Brenne. This area is one of the most important wetlands in France and becoming increasing popular with birdwatchers in particular. Preuilly is only just outside the Brenne, so it was an easy outing for us. At the Maison du Parc there was a Black-crowned Night Heron on the pond, Orioles in the trees and good views of Nightingales singing. Moving on to the Etang de la Mer Rouge, just round the corner from the visitor centre, we had the best of both worlds, with the lake on one side and oak woodland on the other. After backtracking for a nice lunch in the café we spent the afternoon concentrating on orchids - first at Rosnay common, and then at the Etang Vieux near Saulnay.

Kathy wading through the swamp at the Etang Vieux. 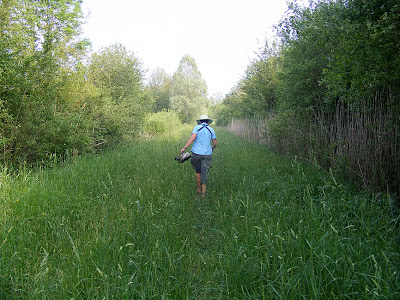 On Thursday we went up to Montrichard for lunch with Ken and Walt and Leon and Sue at La Villa (Ken wrote about it here). On the way we stopped off at Montpoupon and after a thoroughly convivial lunch we headed for Chenonceau and later Chateau Gaudrelle. Chenonceau was remarkably crowd free, especially compared to the week before, which was a public holiday, when it was packed to overflowing. At Chateau Gaudrelle John was able to talk technical with the winemakers, so even though he is a non-wine drinker he enjoyed the visit too. Kathy tried a range of wine and opted to buy a couple of bottles of the Réserve Personnelle, a very well balanced sweet white wine. This time she will be sure to put it in her hold luggage, after having the bottle of sherry she bought us in Spain confiscated at the airport! 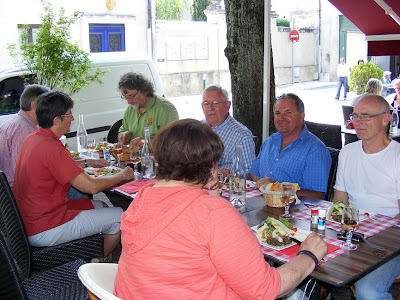 Friday I had various domestic tasks to get done so they went off to visit Fontevraud, Villandry and La Chatonniere on their own. They came back very impressed by Fontevraud and by the Orangerie there, who had gluten free bread and made John a very nice sandwich. They admired Villandry, but were disappointed by La Chatonniere, which they said was looking rather unkempt. In the evening they took us to Jacky Dallais' La Promenade Michelin starred restaurant in nearby Le Petit-Pressigny. The staff there were reassuringly professional about John's dietary requirements and we had a jolly good time. Xavier, the sommelier, was chatty and the food was beautifully presented and very tasty. It is also incredibly good value and not in the least intimidating. If you want to try a truly 'fine dining' experience, this is definitely the place to go around here.

On Saturday, after spending the morning in the Foret de Preuilly, we joined my local botany club for an outing to look at the orchids around Chaumussay (last year's outing report here). It was extremely hot, and many of our local orchids like open roadsides or limestone ridges, so we wore hats, sunscreen, sunglasses and stood around in the limited shade as much as possible. I tried to translate Marc Fleury's little lecture on each of the 18 species of orchids we saw and the day ended with several mugs of his home made cider. Since cider is John's drink of choice, this went down very well and they were impressed with how good it was.

On Sunday we waved them off on their way to Lyon for a few days, then they fly home back to the Canberra ratrace.

Email ThisBlogThis!Share to TwitterShare to FacebookShare to Pinterest
Labels: Chaumussay, Food and Drink, nature and wildlife, the Brenne