I guess the dream of any marketing person is to have 'their' product become so associated with its function or genre that the brand name enters the language. It's one step above becoming a household name. Hoover managed it in the UK with their vacuum cleaners. I've never heard a British person talk about vacuuming, only hoovering. 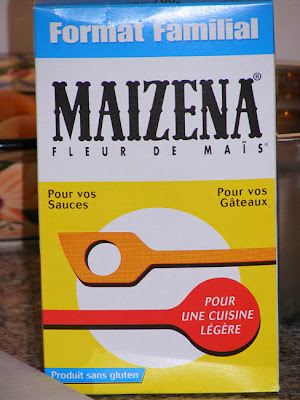 In France, Unilever have managed it with Maïzena. Recipes don't call for fécule/amidon de maïs (cornflour/starch), they tell you to use 2 c. à c. Maïzena (2 tsp cornflour). One of the nice things about Maïzena, too, is that it is actually 100% maize. In the UK a product can be called Cornflour, but when you read the ingredients list it turns out to be wheat starch - a trap for all those needing to cater for gluten free diets.

In case you are wondering:

1. The pair of dots on the i in Maïzena tell you that the i is pronounced, so instead of being 'mayzena' the word is said more like 'myzena'.

2. Cornflour should more properly be referred to as cornstarch, as it is in America. It is not a flour, extracted with a dry milling process, but a starch, extracted using a wet process.

3. c. à c. in French recipes stands for cuillère à café, literally, 'coffee spoon', but in practice this is what would be called a teaspoon in English. c. à s. stands for cuillère à soupe (='soup spoon'), a measure which would be called a table spoon in English. And I'm not going to get into the whole English language thing of how much a tablespoon actually holds and the fact that traditionally a tablespoon is not the spoon you put on the table (that is a dessert spoon).

4. The use of the word corn to mean specifically maize is a New World thing. Traditionally, in Britain, the word corn meant cereal grains in general and could be used interchangeably with the word wheat.
Posted by Susan at 09:00

Good information, Susan, thank you, especially the bit about spoon measurements, which will explain why some of my cooking isn't quite as expected if I try to follow a French recipe.

Susan, have you used the Maïzena Sauceline... known in the UK as Gravy Flour [now almost unobtainable... except for Sainsbury's own brand... which is often an empty line on the shelf]

The gardening/petfood shop in Yardley, now a suburb of Birmingham (where I grew up) was always known as the Corn and Seed Stores. "This all used to be fields" - in the 1930s. It was a corn chandler supplying the local farms (none left even when I was a child).

Interesting post and I thought cuillère à café did mean literally a coffee spoon! Usually though I find it with salt, and I always cut salt back or do not use at all so I guess it would may have made much difference to my recipes! Not yet anyway, I know for next time. Diane

And a c. a soupe is not at all the same thing as a U.S. "tablespoon" — it's a lot more. We in the U.S. keep the British (original) meaning of corn in expressions like barleycorn or black peppercorns. Maize was called Indian corn at first, and in Quebec it is called blé d'Inde. What a confusion of terminology.

Ken, that's why Susan is a taxonomist... it reduces confusion... even if constant name changes leads to more temporarily.
But there are no taxonomist for language [except that lot in Paris who just try to create MORE confusion!!]

I'm someone who 'hoovers' even with a Dyson!

I'll look out for this product in June.