A few days ago we visited Niall and Antoinette over at Chez Charnizay. They'd been to Scotland visiting family and kindly offered to bring back goodies. Our personalised pack consisted of 2 bags of real Scottish oats, a 4 person haggis, a lump of aged Cheddar and some boxes of painkillers (paracetamol has gone up to 19p per box of 16 in Tesco they tell us!)

A Roe buck by the wood pile Chez Charnizay. 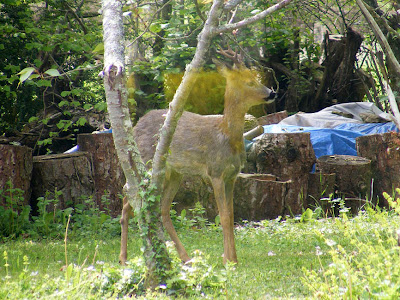 While we were sitting around in the kitchen drinking coffee and discussing what literature we had studied at school (they'd never heard of any of the Australian classics...) a Roe buck hoved into view. As always with deer, he was nervous, hesitant and skittish, but Simon managed two reasonable photos through the glass of the front door. They are spoiled a bit by the reflections from the glass, but not too bad considering we dared not open the door for a clearer shot. Niall and Antoinette said they had never seen a deer come into the front garden before, although they regularly file along the back garden boundary.

Something has his attention... 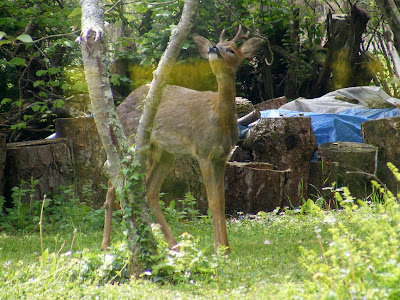 In French there is no real equivalent of the word 'deer' as a generic lay term for all members of the Cervidae family. You can use les cervidés, but you can see it is a more formal word, taken directly from the scientific term. In both French and English you get terminology differences between large and small deer. Big deer like Red Deer have stags (cerfs) and hinds (biches), whereas small deer like Roe Deer have bucks (brocards) and does (chevrettes). But whereas they are all deer in English, Roe Deer are les chevreuils in French and Red Deer les cerfs élaphes. The young (up to 6 months) are fawns (faons) for both species.

Speaking of trends (or at least, statistical predictions) we have a new President, as I am no doubt you are aware. It was a squeakily close run thing, just as the polls predicted. Personally I am not convinced by François Hollande, but on verra... At least he is a moderate. He will not have an easy job, and I hope he manages the country wisely.
Posted by Susan at 09:00

Glad you caught him on camera :-) . He came round again -- but at the back -- late that same evening. He's probably the same one which barked at Niall a couple of weeks ago.

A lovey garden visitor to have.

Check out the paracetamol. Over the past year or so the shop brands of paracetamol (all of the ones i would normally visit) have lots their smooth coating and are now really hard to swallow.

Have you noticed this?

He hasn't got any running shoes on (Reeboks) ...
Thanks again for the haggi

Antoinette: male and at a loose end, I guess.

Gaynor: can't say I have noticed. I'll check when we open one of these.

Melinda: our American clients who are gardeners all complain about deer and go round the gardens here rating plants by whether deer eat them or not.