Today is Victory in Europe Day, usually referred to in France as 8 mai. It's a public holiday, to celebrate the end of the Second World War in Europe and to remind ourselves why the European Union matters. There will be a ceremony at all the war memorials in the country. I thought today would be a good time to pay a little tribute to the gardeners who care for the Commonwealth War Graves Commission Cemeteries all over the world. 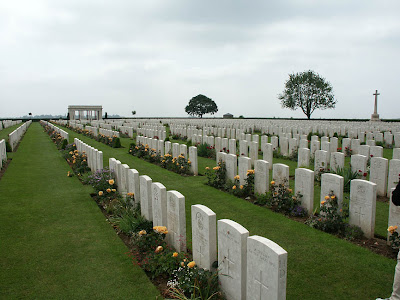 Commonwealth War Graves Commission Cemeteries are as much memorial gardens as they are cemeteries. The original blueprints included the distinctive, but simple common headstone design, which were to be set into a carefully thought out selection and arrangement of flowering plants. Since 1918 the Commission has looked after 708ha of land throughout the world, and the significance of flowers was recognised from the beginning.

Initially it was hoped that plants indigenous to the countries of the fallen would be used, in order to enhance the connection between the deceased's place of rest and his place of origin. In practice this turned out not always to be possible, and so far as I can tell (having checked the list provided on the excellent CWGC website) no Australian plants are used in Europe. Nevertheless, plants are carefully chosen to soften the rows of headstones and provide a rain splash filter but not obscure the inscriptions. In addition, the Commission wanted visitors to feel at ease and that they were in a place of beauty and peace, rather than somewhere eerie and frightening. In France, the graves and gardens are set in lawn, emphasising the garden atmosphere.

You can read more about the Commission's approach to gardening in the cemeteries on their website.

Susan would you like a photo of a cemetery in the Western desert? Equally well tended, and cared for by people who could have no conceivable reason for caring...but still do. Understandably a bit less...green. Nice post and a wonderful angle to take. Thankyou.

So many flowers fallen before their time...

I completely agree with you!

What always amazes me is the sbsolute 'straightness' of the rows of graves. Everything in line with everything else.

It's a labour of love and I hope even as the memory dims this important job of work will continue.

Last June, the director of the Péronne's Art Museum, in Picardy, took Ken and me for a tour of the W.W.I battlefields and cemeteries where are buried all the brave young men, thousands still not accounted for, who died in the “Bataille de la Somme.”

It was a very moving experience, accentuated by gray skies and a steady drizzle. The memorial at Thiepval and the Newfoundland Cemetery were the highlights of the tour.

Long may the care continue. We have often visited the WW1 battlefields and Commonwealth cemeteries. The care lavished on them is uplifting even though it is so sad to see how many died.