Manna Rising From the River

A miraculous biblical miracle, manna is the name given to a natural phenomenon in France involving some species of mayfly. Mostly known as a source of bait for fishing, mayflies emerge in great numbers and in some areas are harvested by local residents. Before the species involved (mainly the small white Ephoron virgo) became rare, manne blanche was the bodies of mayflies full of eggs, highly nutritious and a real delicacy for domestic fowl. It became the hub of a cottage industry harvesting the mayflies for raising poultry and game birds.

The emergence of the manne is spectacular. Principally associated with the big lowland rivers, the mayflies synchronise their emergences, so that massive numbers appear over a very short period, generally in the evening for a few days in the summer. Their aim is to mate and lay eggs, after which they quickly die, forming a filmy carpet of floating insects, sometimes several centimetres thick drifting down the river. 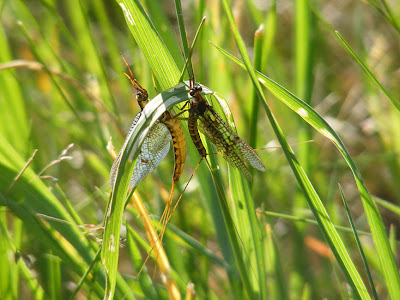 Other, bigger, species are also known as manne and are popular with fisherman. These are primarily the big Ephemera spp, the most common of which is E. danica. The Ephemera spp emerge from May to September, peaking in late May, early June. Some years there are short spectacular episodes where there are massive numbers of adults on the rivers. Every year, just in case, a sign is posted on the bridge across the Vienne at Bonneuil Matours warning that the road might be slippery due to a mass of fat dead mayflies. 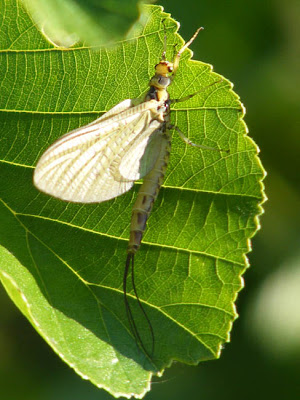 During their metamorphosis into adults they are very vulnerable to predators. Fish pursue the larvae as they mount towards the surface to transform and snap up the adults just before they make their first flight. In French the fish are engaged in gobage, a word that means crudely slurping sucking swallowing - in other words, gobbling. There is a school dining hall game here known as gobage de flamby which involves sucking out and swallowing whole the contents of a popular caramel flavoured dairy based dessert that comes in little individual pots. I think the mayfly emergence is the fishy equivalent! It's not just the fish enjoying the feast either - bats, dragonflies, martins, swifts and swallows, wagtails and spiders all benefit from gorging on this high calorie diet.

The big Ephemera spp are relatively tolerant of organic pollutants and herbicides in the water and so most continue to thrive in rural areas. It's a different story for the smaller species, which have been badly affected in addition by high concentrations of heavy metals in the water, canalisation and controls like weirs on watercourses, and light pollution. This last can disturb females, attracting them away from the river and preventing them from laying.

Hi you may find this article of interest. http://web.sbe.hw.ac.uk/staffprofiles/bdgsa/11th_International_Conference_on_Urban_Drainage_CD/ICUD08/pdfs/194.pdf

Re heavy metals in water. C

Colin: thanks - very interesting. I've only skimmed it, but will definitely read it properly soon. The bit about PVC guttering leaching lead was new info for me (hadn't occurred to me how the UV protection for plastics works). I like having quantitative information rather than anecdotal.

The Manna has been feeding hungry White Wagtail chicks for the past few days... the parents seem to be targetting them more than any other species that are flying at the moment.

Tim: The photos above were taken at your place last year. They are two different species of Ephemera - danica (below) and vulgata (above). I'm not surprised the Wagtails are targetting them - they are remarkably nutritious from what I read.