Last year I wrote about my family's experience of emigrating to Australia. Whilst things here in Preuilly sur Claise are quiet, I though I would continue the story...

The first Sydney ferry I ever rode, the apparently
unpopular Kooleen. I always had a soft spot for it.
Photo by Jack Davis,1963 (used with permission). 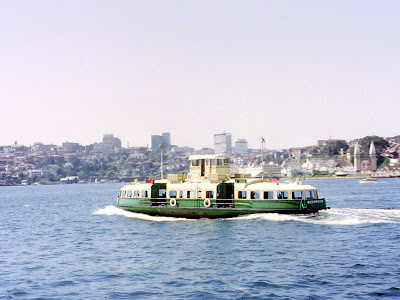 After about a week living in the boarding house in Neutral Bay, my father found us a flat (apartment) in an old brick and sandstone house in Hunters Hill, one of the more exclusive suburbs of Sydney. It consisted of 4 rooms and a shared bathroom on the upper floor of a building built as a boarding house which later became a pub known as the Gladstone Hotel. The building had once been quite grand, with wide verandas and plenty of cast iron lacework, but by the time we were living there the wooden floor of the verandah was rotting, even though the iron lacework remained. More recently the building has been restored and turned into very stylish apartments - this used to be our front room. Coincidentally to our current situation, part of Hunters Hill was regarded as the French settlement of Sydney as part of the area was subdivided by a pair of brothers from Bordeaux, and many of their compatriots moved to the area. One of those was the French Consul, who lived in a building called Passy House. There is more about Hunters Hill here.

That's our house! Our living room was the corner room
on the upper storey( by John Ward used with permission) 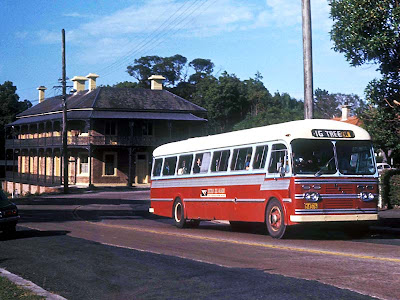 A couple of days after moving to Hunters Hill I broke my arm falling of a "slippery dip" (slide) in the park opposite our house. This meant a night of pain, and the next morning a trip to Sydney city to visit outpatients at Sydney hospital. As it was a special trip we went by ferry, a mode of transport we usually didn't use because of the expense. This involved catching a bus to the Valentia Street (Woolwich) wharf and one of the old "K" ferries to Circular Quay.

This is Valentia Street Wharf as I remember it 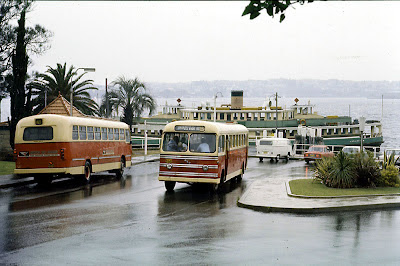 Once at the hospital I had x-rays, and my right arm was encased in plaster. We then caught the ferry back to Hunters Hill. Showing how was grown up I was, I did what all adults did at that time: as the ferry arrived at the wharf I jumped ashore before the gangplank was in place. Unfortunately I landed on the plaster, and cracked it in two. Luckily the ferry hadn't left to go back to the city, so we climbed back on and I ended up with an industrial strength plaster cast.
Circular Quay in the late 60s - the Opera House
is still being built on Bennelong Point 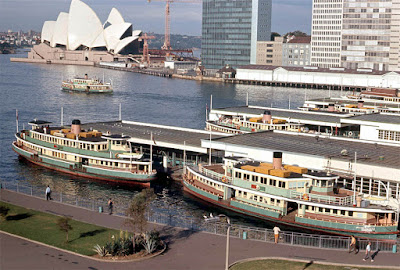 The other events I remember vividly from our time in Sydney was being allowed to stand on the verandah to watch Apollo 7 make its way across the sky, and starting a long interest in photography by making a pinhole camera and developing the film in the bathroom with Dad. I can also remember catching the Manly Ferry on New Years Day 1968 to watch the start of the Sydney-Hobart Yacht Race and being convinced that the ferry was going to sink because it started rolling as we passed in front of Sydney Heads. (The weather wasn't this rough, but I was a London boy and no-one had warned me.) You may even be able to see me in this photo.

After 18 months my father found a job in Canberra and we left the life of living under Sydney Airport's flightpath for a life of complete... well - Canberra was never the most exciting of towns.

None of these photos are mine - I have tried to contact the owners of the bottom two photos for permission, but not heard back. If they are your photos and you object to their use here, please contact me.
Posted by Simon at 09:00

Oh, I bet Dad was thrilled to
pay for two (expensive) round
trips on the ferry. And two
casts!
Once met someone from Canberra
who told me about the "Canberra
Wave" (for the flies).

Fascinating post Simon... and you haven't really changed have you?

The colonial 'Victorian plastic' verandas are superb... they look as though they make very swish appartments!

A really interesting post, Simon. I can imagine that your parents weren't very pleased to have to front up at the hospital again.

I think I spotted you on the ferry though. Are you the one on the dog lead?

I doubt if being back at the hospital was the first thing my parents were lookng forward to, but at least the second cast meant I kept the sling on. It would have torn my arm off otherwise...