Bee Orchids in the orchard. 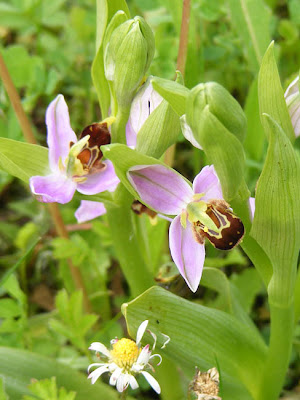 Sexual deception as a means of achieving pollinization is exclusively known from certain orchid genera. I knew, theoretically, that our orchard should be a hot bed of sexual deception, but I had never seen it in action before.

A bee lands on an Early Spider Orchid in the orchard...

Two of the species of orchids in the orchard are from the genus Ophrys. Species in this genus don't produce any nectar to attract and reward pollinating insects. Instead, the flowers have evolved to look like insects, and they exude a pheromone which tricks male bees into thinking the flowers are female bees. The male bee comes to the flower and engages in what the scientific papers refer to as pseudocopulation.

It quickly moves to the top of the flower spike...

In practice, Bee Orchids, whilst they look like lovely furry bees, aren't very successful at attracting a 'mate'. Luckily for them, they are one of the few Ophrys who are not reliant on an insect partner and more often than not self-fertilize.

...where it attempts to mate with a newly opened flower.

The Early Spider Orchids can also self-pollenize if really necessary, but although it is not commonly witnessed, there are significant numbers of records of Mining Bees acting as pollinators too.

An Early Spider Orchid in the orchard. 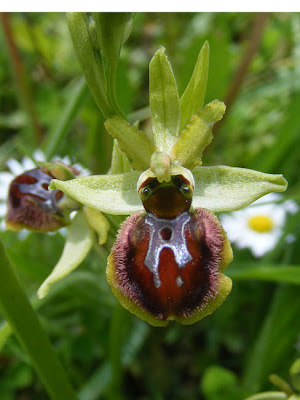 'My' bee was only interested in the very newly opened flowers. Like many orchids, Early Spiders unfurl from the bud upside down and twist themselves around once fully open. The flower the bee chose was still upside down. Nico Vereecken's fantastic pictures of male bees and wasps 'mating' with Ophrys spp orchids show they have two styles - head first and abdomen first. The one I watched went for both positions!

The last picture doesn't show and Orchid... it shows a brown furry frog in a green hat and a posh silvered waistcoat... that's why they aren't successful at attracting a partner!
Tim [not PG]

That should read 'an Orchid' not 'and...'.
But looking further at that pic, it is "Toad of Toad Hall"!

It's an education to read your blog. I learn something new almost every day. I just wish I could remember it!

Tim: It's the pretty pink ones that can't get laid. The frog's in velvet waistcoats have no trouble.