The Old Bridge at Chinon is Strengthened

The oldest sections of the bridge crossing the Vienne at Chinon probably date from the 15th century.

Today, the general deepening of the riverbed has resulted in significant erosion immediately downstream from the structure. This means that there is now a risk that the ancient piers (set on timber piles) have become destabilised.

The bridge from the Quai. The works can be seen through the arches.
For better pictures of the action, go to Colin and Elizabeth's blog
(with the latest update here). 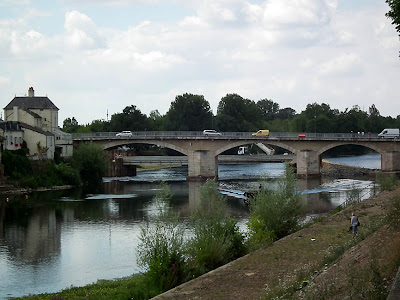 The Conseil général has 'stumped up' (geddit?) 1.5 million euros to enable reinforcement work to be done on the bridge over the Vienne between May and October this year. At the same time they are improving the access for boats.

Road traffic will be unaffected while the work is carried out, but boats will be diverted around the construction zone. The département has set up an exhibition to tell the story of the bridge and show the different phases of the work.

The exhibition describes how the bridge was originally constructed in the 12th century, and its many alterations up until the present. In June they excavated and removed one of the timber piles and it is now on display. Daily life on the river is represented, with fishing, boat traffic, floods and the bombing on 29 August 1944. The exhibition is free and can be seen at l'espace public départemental, 6 rue des Courances, Chinon, until the end of October.