Back in April (was it really that long ago?) I sanded the landing on the first floor and varnished it. This looked OK, but it was really only a temporary fix: the floor wasn't level, and it caused a trip hazard at the top of the stairs.

Likewise, the floor on the second floor landing (visible here). Although the bathroom floor was firm and level, the landing was what could be called authentique, with a fall across the 1.8metre floor of 6 cm (about 2½" in 6'), multiple holes and evidence of dry (or wet, or both) rot, not surprising considering that at one time (a couple of hundred years ago) this floor was external.

We started with the second floor, cutting away the floorboards where the floor was at its highest, and adding height and levelness (is that a word??) to the joists. We then did the same to the rest of the floor, but screwing the new joists through the old floor and into the old joists. The whole lot was then refloored with solid pine floorboards.

Cutting away the old floorboards 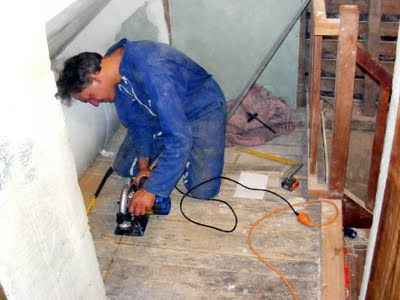 Levelling up. You can see how much fall we had. 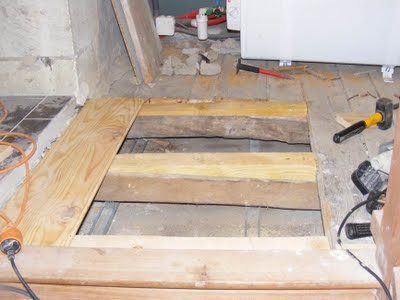 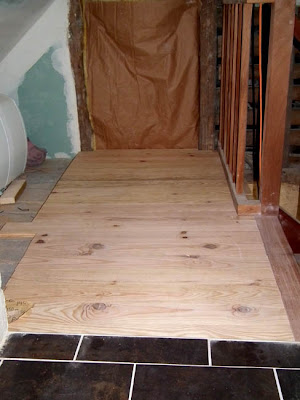 After living with this result for a day or two we decided to undertake a similar process with the first floor landing. For a while I was undecided if we actually wanted to level this out, but in the end practicality won out over aesthetics and conservation (but only just).

The first floor landing. You can see the thickness of the walls
and where the floor in the doorway was just balanced on stones 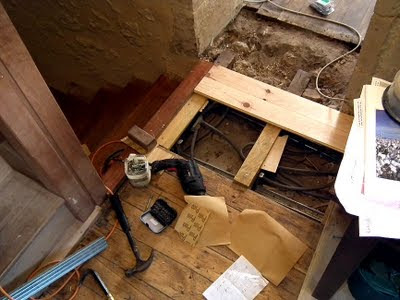 We now have just a little fine tuning* to do to the first floor - refitting the old floorboards in the doorway, sanding staining and varnishing the new boards. More photos will follow, I am sure.

And where were we 10 years ago today? I was in my office on the 4th floor of the rather grand former headquarters of Anglo-American Oil, next door to Wellington Barracks on Birdcage Walk and overlooking St James's Park in London. One of the National Trust curators had come in to check the archives and I was talking to her about the Eucryphia trees in the gardens at Nymans. Simon, who was at home, rang to say that a plane had crashed into the World Trade Centre. At that stage, even though we worked in a building that had film on the windows to prevent flying shards of glass in case of bomb attack (a relict of the Troubles) it never occurred to us that it was a terrorist action. We immediately assumed it was some incompetant amateur in a light plane. Of course, Simon rang shortly after to say another plane had flown into the other tower, and everything changed...

— fet·tle tr.v. fet·tled, fet·tling, fet·tles. Metallurgy. To line the hearth of (a reverberatory furnace) with loose sand or ore in preparation for pouring molten metal.

So "to fettle" and "fettling" seem to be technical terms in American English. We "fiddle" with things, the same as "fine tuning." Walt and I were in Provence 10 years ago today, on vacation.

Susan, I also remember that before I went to bed that late night of September 11 and hearing the news - I woke Sue - we sat in front of the TV - it wasn't Hollywood - it was New York and it was real!

I was in the FDR office in Leeds on 11th September 2001, where we weren't allowed to use the internet for "personal" use. We sat all afternoon watching CNN live, aghast.

If the floor was outside at one time, surely the 'fall' would have been deliberate to allow it to drain?