As the French monarchy became more stable in late medieval times, the king, Charles VII created the position of 'official mistress'. Agnès Sorel was the first successful applicant for the role, and one of the most romantic. As the official mistress she was more or less another queen, living like a member of the royal family and involving herself in politics.

In the 15th century marriage was an economic and political union of families. Love had nothing to do with it, and there was an extremely high tolerance of extra-marital relationships. Prostitution was not condemned and indeed, the King owned at least one brothel. 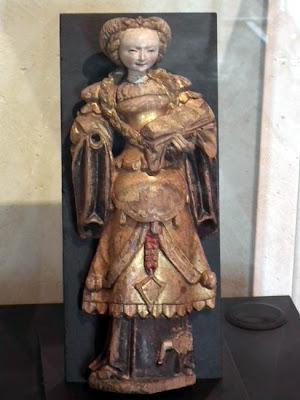 Even so, in contemporary depictions, Agnès is represented in disguise as the Virgin Mary. The most famous portrait of her is The Virgin and Child Surrounded by Angels, from the right hand panel of the Melun Diptych, commissioned in 1452 by Etienne Chevalier from Jean Fouquet. Etienne Chevalier was the King's secretary, and in the year he commissioned the Diptych, became Treasurer of France and Secretary of State. He and Agnès were close friends and he discussed matters of state with her in the King's absence. Curiously, the Diptych was hung over the grave of Chevalier's wife, in his home town of Melun.

Despite the name of the painting, a note on the back states that this is 'the Holy Virgin, with traits of Agnès Sorel, mistress of Charles VII, king of France, died in 1450', and most scholars agree that this is a likeness of Agnès. She is portrayed as the Queen of Heaven, richly apparelled and wearing a crown set with pearls. There is very little depth of field in Heaven apparently, so the baby is rather alarmingly perched. The startlingly blue and red seraphim and cherubim crowd in on her. She gazes solemnly and modestly towards the floor.


A copy of Jean Fouquet's Virgin and Child.
(The original painting is in Antwerp). 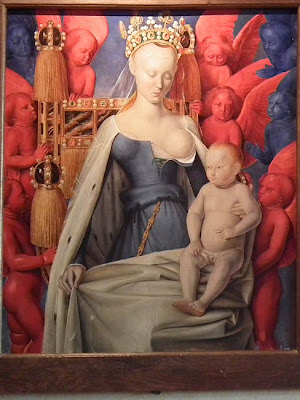 The artist's intention is to compliment Agnès by taking her as the model for the Virgin. He is also honoring the Virgin by associating Agnès' grace, beauty and high social standing with the Madonna. She is depicted exposing a breast, a motif known as Madonna Lactans (the Suckling Virgin). It was a symbol indicating that the Madonna is someone that mothers can identify with (in fact, in the case of the Virgin Mary, breastfeeding was the only part of the biological act of motherhood that she was required to participate in). By extension she is offering comfort and sustenance to all Christians with this commonplace and loving act. She is an intermediary between God and man. Also, as character traits were believed to be acquired through the breast milk, breastfeeding was a sign of a good mother.

Nudity at this time was a symbol indicating humility, and it had been a tradition for several centuries to depict the Virgin bare breasted. Of course, this had some pitfalls as far as the Church was concerned. A bare breast could incite somewhat less holy thoughts if not carefully 'de-sexualised'. Fouquet does this by painting an unnatural nippleless sphere, slightly too high and too far to the left. 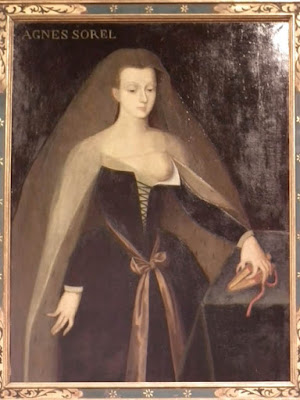 Later portraits of Agnès continued the tradition of the exposed breast and it became associated not with the Virgin, but as a sign that the woman depicted was a royal mistress. As French kings became more powerful the position of their mistresses was more and more assured, allowing women like Diane de Poitiers to be depicted outside the Christian tradition, as a Greek goddess, and by the time Gabrielle d'Estrées was the incumbent, the King and by association, his mistress, was powerful enough that she could be depicted as herself.

All these works of art are to be found in the room dedicated to Agnès Sorel in the Logis Royal, Loches.
Posted by Susan at 09:00

Email ThisBlogThis!Share to TwitterShare to FacebookShare to Pinterest
Labels: Loches and area, Packet of Three