The Château d'Ussé is famous for having been the place to inspire the original Sleeping Beauty story. Its author was Frenchman Charles Perrault and the original version is called la Belle au bois dormant.

This attic is just a maze of timbers. 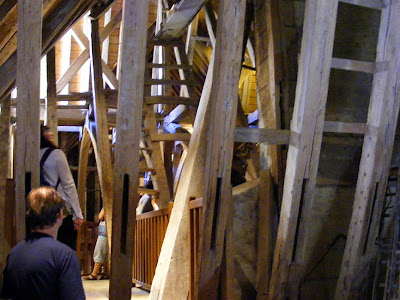 Naturally the current owners milk this association for all it is worth, which has an unexpected and much more interesting consequence. You are allowed up on the wall walk (to view tableaux of the Sleeping Beauty story) and from there into the roof spaces. The reason vide greniers (garage sales) were invented is clearly demonstrated and the quantity of wood used in the construction of these places is staggering!

No doubt artfully arranged, but an amusing collection nonetheless.
Blacas is the family name of the current owners. 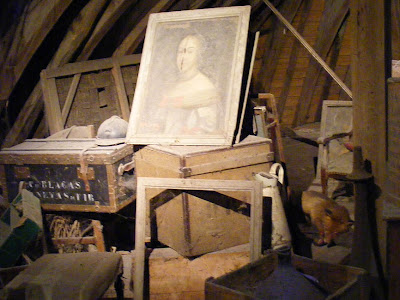 Wall walks are a relict of these Renaissance chateau's defensive systems. They allowed men to patrol the perimeter, protected within the building. The wall walk is a narrow passageway that runs round the château, situated on the corbelled level a couple of metres below the roof. Usually the gaps between the corbells are open, to allow men to look out and to fire weapons. It's rare to be allowed up into these spaces. Azay-le-Rideau is another château which has (just recently) restored and opened their wall walk and attics, but at most châteaux you only get to see the grand apartments below. The charm of Ussé is that they are so untouched looking, crammed full of discarded possessions from several centuries, covered in dust and absolutely fascinating.
The junk just goes on forever... 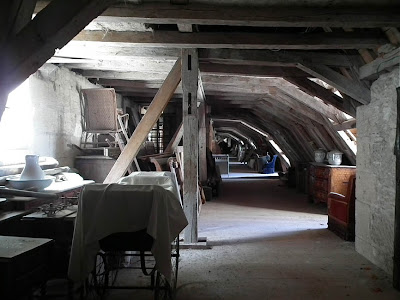 The slightly vertiginous view from one of the tower staircase windows. 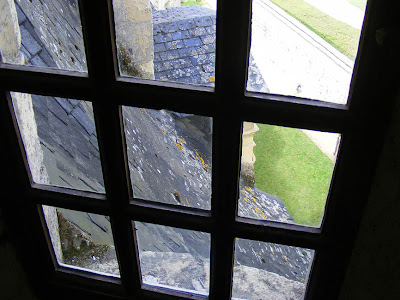 Looking up into the 'pepper pot' roof of one of the turrets. 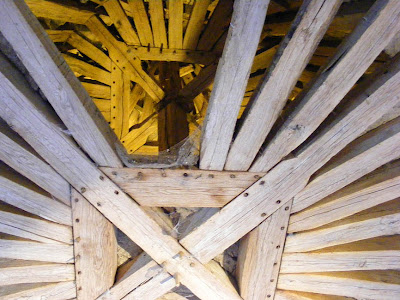 Another Loire chateau offering a splendid wall walk is Langeais, with a spectacular view of the suspended bridge over the Loire River. Martine

Martine: That bridge is fairly impressive, isn't it! Actually, Langeais might have been the first to open up their wall walk.

It seems to me the way Perrault phrased the title of this tale means that not only the Beauty was sleeping but also the woods around her château were in dormancy, all waiting for Prince Charming. In the English title that notion is lost!

CHM: I'm glad that's how it strikes you. I had the same thought, but because my French is fairly hit and miss, wasn't sure if I was just making it up.

Susan, you understanding of French is much better than you think. I've read some of your translations into English and they were pretty accurate.