This is all about constant velocity (CV) joints, or as they are known in French, cardans. 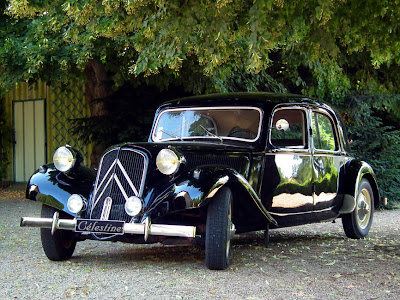 Célestine is a Traction Avant - front wheel drive - car. This means that the front wheels need to do not only steering, but power as well. Whilst it is easy to send power along a straight axle to a wheel and it is easy to make a wheel change direction, it isn't easy to send power along an axle to make a wheel spin and change the direction the wheel is pointing (i.e turny wurny and bendy wendy all at once).

Pay attention at the back there...

The very first Traction Avants had universal joints between the gearbox and front wheels, a very simple and very old solution: the ancient Greeks knew about them even though they probably didn't do front wheel drive chariots. The problem with universal joints is that even when the input shaft (the bit being turned by the gearbox) turns smoothly, the output (the bit attached to the wheel) is irregular. There is a very complex sum here that explains it (don't ask me - I had to have a lie down after 4 lines...)

A universal joint (from wikipedia)

A double cardan (also from wikipedia)

Anyway - this works, and is how Célestine works as well. Except at the moment she isn't working as well as she could, so she is having her cardans looked at. For the past couple of thousand kilometres she has had a slight graunch in the left hand wheel, and it is suspected by people cleverer than me that there could be wear at the end of the cardan. 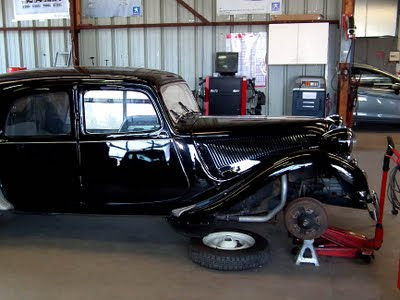 M. Musseau did a really good job of a temporary fix so that we could continue working, but now Célestine is with Dr. Traction who has all the proper tools peculiar to the fixing of Tractions Avant. In two days time she should be right as rain, maybe with a new cardan, maybe not.

There. Now that is clear as mud we can all get back to more important things, like weighing the cat.

The angle of dangle is given
By the throb of the knob. It's driven
By the heat of the meat,
As a function discrete:
Get it on, or get off !!!!

I understand more about Traction Avants and ALL their problems. As for cats, I know nothing even though we have two.
I'm sure once Celestine's universal joints are fixed, she will be as sure footed as any cat.
Leon

I'm listening to "Once upon a Time in the West" from Alchemy and watching the two Wiki cartoons... very relaxing!! Nice post Simon... but I'm not going to link on that click... see, I'm confused just thinking about it!!

Our cat is 8.68 kilos... and the vet reckons he ain't overweight... just HUGE... over a metre long nose to tip of tail. Tends to burst voles if he lands on them though...

Nice videos, very relaxing and made a change from watching the fish tank.
BTW, I didn't know you had a cat.

Jean - we don't, but when we are looking for task avoidence we weigh Stéphane's cat :¬)