The Château du Rivau is between Chinon and Richelieu, and of all the gardens we visited in our whirlwind week of garden touring in mid-July, I think this one was my favourite.

It was originally recommended to us by our friend 'Henri Proust', who writes the blog for l'Eminence Rouge. The website, slightly irritating Disneyesque fairies bouncing across the page notwithstanding, is informative and well laid out, and HP assured us some time ago that the garden had some interesting design elements.

Last year the château suffered a devastating fire in the roof of the private apartments. None of the rooms on show were damaged, but the family lost quite a lot of personal possessions I think. I read an interview in the paper with Patricia Laigneau the owner and thought she was remarkable. The award winning château restoration had been finished only weeks before. It had been years of hard work, creative thinking and pouring money at the place. It must have been heartbreaking to see it go up in flames, but Patricia put the most incredibly brave face on it. She encouraged visitors to continue to come and just stoïcly prepared to repair the roof.

The memorial to the fire. 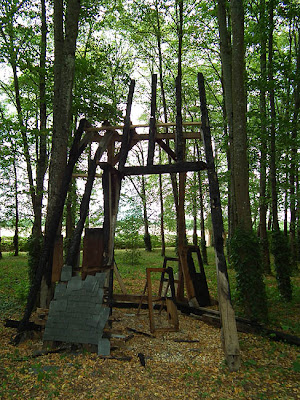 When she and her husband purchased the château, Patricia decided that she needed to train as a garden designer, because not only did the buildings need to be rescued, but if they were to be shown off to best advantage they needed a garden to enhance them. The garden she has created uses many of the tricks of formal French grand gardens, but she has had enormous fun too. The garden is relaxed and in some places a bit cheesey even.

Gigantic rubber boots frame the château in this view. 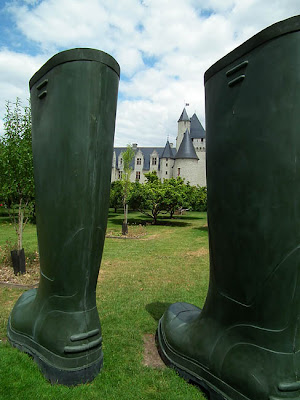 The Laigneaus and their team have done a vast amount of archaeological research to aid their restoration. The story is presented in the stable block and is well worth spending the time to read. The château is believed to be constructed from stone extracted from the area by the entrance, now planted with a clever knot garden, made entirely from different types of lavender. The grand stables were built in the Renaissance to replace a much simpler vernacular building which housed the great war stallions bred on the estate and said to be crucial to the success of the French army lead by Joan of Arc.

Who would have thought lavender varieties were so different in colour? 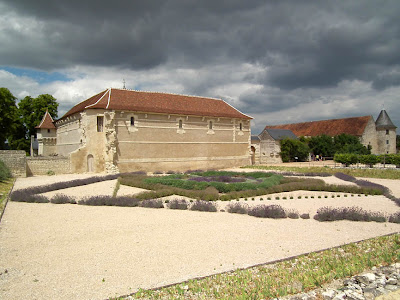 The main château building is a beautiful fairytale creation with turrets and pointy bits. Patricia has been unable to resist hanging a long hank of 'hair' out the window of one of the towers. The complex is a rare example of a blend of decorative and defensive architecture from late medieval times, the precursor to the almost purely decorative Renaissance examples such as Chenonceau.

This beautiful roof detail is just to the left of the gatehouse. 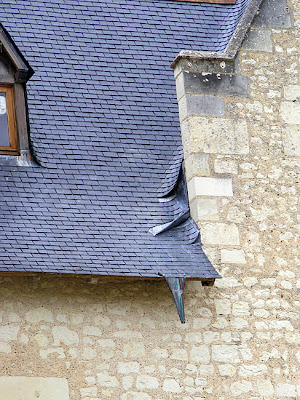 Rivau is a delight. It stands as testimony to the dedication of its owners and an exemplar of restoration practice and technique. But above all, it is a fun place to visit. It takes the stuffiness out of garden design and defies us to take ourselves too seriously. I love it!

We visited after reading about it on Colin and Elizabeth's blog and loved it. i know what you mean about the fairies, although children are obviously made very welcome there.

We were shown round their hotel accomodation which is expensive and has to be booked en bloc. It was rather nice though .....

Wonder how they got on claiming from the infamous French insurers.

Looks a delight though.