The Basilica of St Denis is where many of the Kings of France were buried, and the place where many of the funeral monuments of Kings that weren't buried just north of Paris were moved to in the late 19th Century.

We visited there last week, and were standing in the large square at the front of the Cathedral taking photos (difficult, with the sun behind the building) when a lady walking into the Mairie warned us to be very careful of thieves, who would snatch our cameras and run away. We have read warnings that this is a problem in the area, but were surprised to have someone French (and presumably local) say it to us.

The front of the church 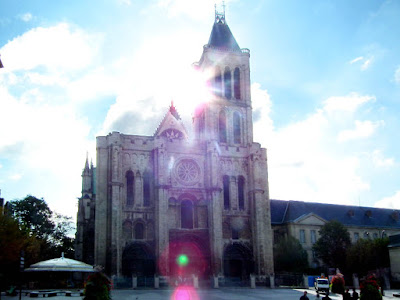 Of course, the warning made us look around for a potential thief, but the square appeared to be almost deserted except for other tourists taking photos, and it wasn't that busy when we left after visiting the tombs, either.

One of the portals 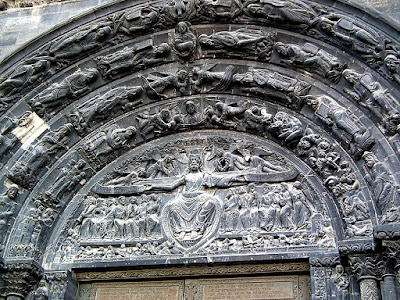 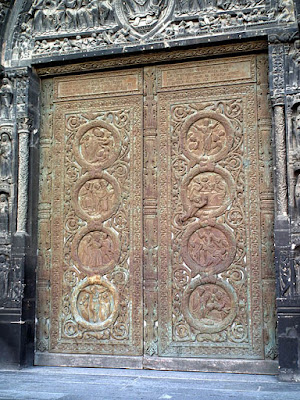 Still - you have been warned. The Basilica is worth visiting, but keep your street smarts happening at all times.

Simon - as much as we were enthralled by the history of the cathedral and the crypt, we were also very apprehensive about the area, not by reputation but by a 6th sense.
But really I need to know how Saint Denis carried his head all that way and why now Rue Saint Denis is the red light district of Paris. Hmmm!
Leon

Leon: We didn't find it a particularly threatening area. I presume it must have its moments though if the locals feel they should speak out.