On Sunday I did my final butterfly survey for the year, competing at times along transects with blokes in camouflage gear carrying shotguns and accompanied by lolloping retrievers. Yes, hunting season has begun, so I decided wearing a hi-viz vest was prudent.

Halfway along transect 8, a ride in the Parc de Boussay, I came across some Bolete mushrooms (also known as ceps, cèpes or porcini) growing in the grass near aspen, birch and pine trees. I could see they were not the highly prized Boletus edulis, but I had a strong hunch they were an edible species, so I picked 7 or 8 and took them home. 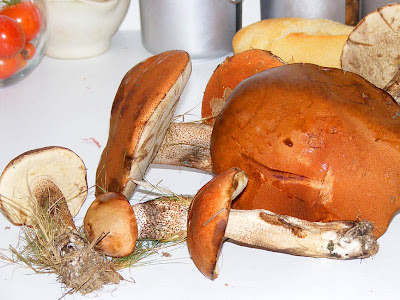 Once home I looked them up with the limited fungi resources I have in the library of field guides, and on the internet. I concluded that they were Leccinum aurantiacum, called Boletus aurantiacus in any guide older than a couple of years. Bolete taxonomy is a nightmare, but those great guys and gals at Kew are working on it. L. aurantiacum is called the Red-capped Scaber Stalk in North America, but its French name is le Bolet orangé. I telephoned my friend Louisa, who has lots of fungi books and has often been foraging for fungi. She wasn't home so I left a message.

Fortunately my specimens seemed to be very typical examples of the species, which is quite common and relatively easy to identify, at least sensu lato (all the good fungi sites discuss closely related and similar species). The key features are a chestnut cap, beige pores (boletes have a spongy underside, not gills like regular supermarket mushrooms) which are pale in young mushrooms and darken with age, an overhanging cuticle, brown scabers on the stipe (stalk) which go black with age and cream flesh which stains blue-black when cut. They are considered good eating.

Just to make sure I put them in the fridge overnight and took them to the pharmacy on Monday. One of the pharmacists was clearly used to being asked to identify mushrooms and her reference book was just under the counter. She checked all the diagnostic features, as did our doctor's practice nurse, who happened along during this process. We all agreed that it was B. aurantiacus.

A young one, freshly sliced. 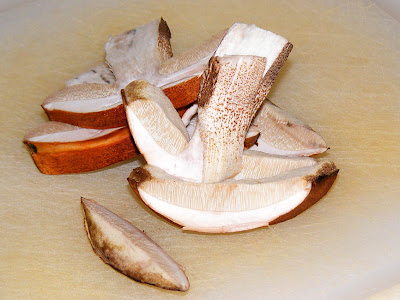 Just to make extra sure I paid a visit to my friends the Chedouzeau family, who run a local restaurant. Christophe informed me that he had found some himself the day before and they were edible. Martine and a male customer in the bar agreed that they weren't les Bordeaux (as B. edulis is known in French) but then proceeded to give me several recipes for preparing ceps and Christophe warned me to cut most of the stems off, as they would likely be full of maggots.

Everyone was very relaxed about the idea that I was planning to eat them. Just to make extra double sure though I sliced them and put them in the oven on a low heat with the fan to dry them. Many mushrooms are safer to eat if they have been dried and/or cooked than they are to eat raw. It also meant that I didn't have to commit to eating all of them immediately or wasting them.

By now the mushrooms are starting to stain black. 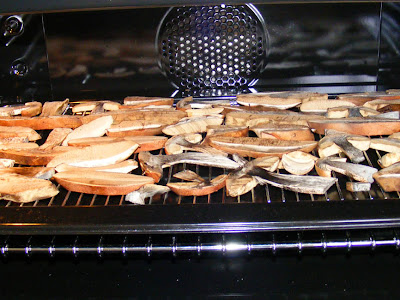 I'd no sooner popped them in the oven than Louisa arrived, with a couple of Canadian visitors in tow. She had brought her books and we went through them, again arriving at the conclusion that this was B. aurantiacus. We both tasted a tiny piece, just to check there was no bitter taste - a characteristic of a couple of inedible boletes. She said that some years B. aurantiacus was very common here. Her opinion was that they are very good eating, although because they go an unappetising looking black colour, they are not considered as good as B. edulis.

After 2½ hours drying in the oven, the kitchen smelled very satifactorily mushroomy and the ceps were leathery. I've put them in a jar in the pantry until I decide on how I want to cook and serve them. I'll probably start with some in a simple milky soup as a good way of testing them.

No consulting with the pharmacien?

Ken: yes - that's para 5. I was interested that she didn't do any chemical reaction tests, just did what I did i.e. checked off all the diagnostics listed in the book that were visible to the naked eye.

Our village pharmacy just puts a poster up in the window.

We've a garden full of assorted mushrooms, some like illustrations from children's books (I expect to see pixies sitting on them) but I don't feel very confident about actually deciding which ones I can eat.

Last year someone we know was seriously ill having eaten the wrong sort.

SP: it's not just the wrong species you have to avoid. Mushrooms that are too old, in combination with alcohol or painkillers, not cooked sufficiently, eaten by someone susceptible - any and all of these can also cause problems. My plan is to have a small serve myself before I try them on anyone else.

i just avoid mushrooms completely, but i guess if i actually liked them, i would have a different outlook....when we took a family trip thru france back in the 60's, everyone in the group got sick except me due to the chef throwing in some wild shrooms

It was a pleasure to meet you. Amazing things happen in serendipity-land.