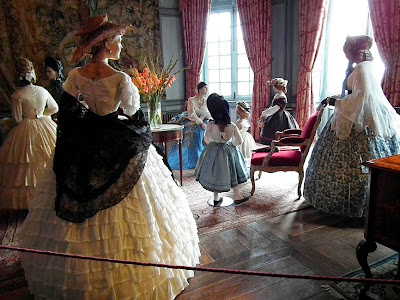 The Château d'Ussé is one of those places that a lot of reviewers like to be sniffy about. This seems to be largely because of its connection to the Sleeping Beauty story. It's seen as rather 'Disney', rather cheesey, a tourist trap for those with small girls, but of no real historic or artistic merit if you are a serious château goer. 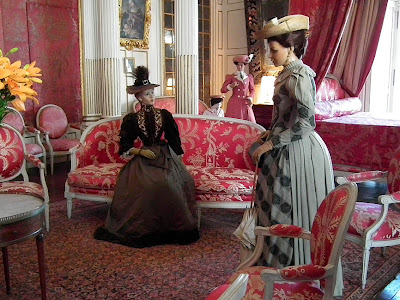 Personally I think this is unfair. It's hardly their fault if Disney modelled Cinderella's castle on the place! There are some stonkingly good pieces of furniture, ceramics and a few paintings in the main public rooms, and the 'new' chapel has some glorious carvings. Added to that there is an excellent costume collection. The costumes are displayed on mannequins in tableaux, populating the rooms. Every year a different set of costumes is brought out, and the tableaux change. They've been doing this for several decades, with each year having a different theme. This year's theme is hats.

War may be looming, but so are the hats.
Early 20th century evening wear. 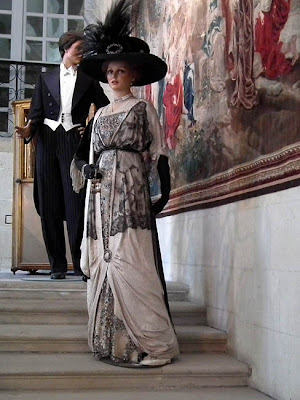 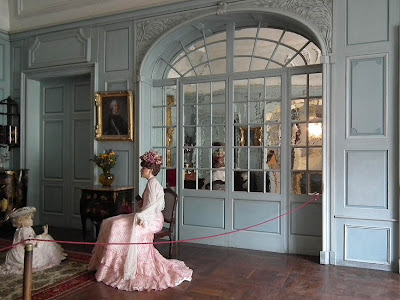 You may have noticed (or it may not even be happening to you, in which case I wouldn't expect you to notice...) but clicking on the photos now brings up a copycat lightbox type viewer. It isn't our fault, and I cant work out how to stop it happening. I hate it.
Posted by Susan at 09:00

Yes it is annoying and it stays in the same window which is even more so.. Hope you can sort it. See if you can find it in the HTML script and just delete it.. Save your original first. C

I love Usée, especially all the fairytale stuff, and the view of it as you come along the riverbank from Bréhémont is quite stunning.
They serve nice ice-creams at the nearby café, too.
What more could a tourist want?

Colin. It's a bug (apparently) Google servers are putting it into the blog as part of the page load procedure - it doesn't appear in my template HTML

I hate it too, Susan. Just noticed it for the first time today.

Actually that was Simon. Susan doesn't know that much about Julian and Sandy. Or HTML

By the way, the Webster's Unabridged Dictionary of the English Language says that "to fettle" is dialectal, and "fettling" is British dialectal.

Ssuan/Smion... I use target="blank" in the picture location html in order to 'comand' a load into a new page... the 'Lightbox' effect isn't happening on our blogs; I've just checked. Just a thought.

as do we. It's an experimental bug. Hopefully when it turns into a real bug there will be a way to turn it off.

If you google lightbox there is loads of info C

I also like the interior of Ussé and all those beautiful costumes and the kids love the purely fairytale part. It's nice for them to have something of greater interest than a lot of the châteaux have to offer.

Fraussie: Kids like the underground bits too. The costume collection is serious and properly curated and presented, but no one ever mentions it.