The Loire Valley is home to an unusually high number of species of Clubtail dragonflies. It would be possible (although I don't know if anyone has actually done it) to see 5 different species of these medium sized black and yellow dragonflies, plus a couple of related species, in a single day on the Loire River. Here in the Claise Valley, the southern most reaches of the Loire system, we get three species. All of them can be seen well away from the river, but you need to be stealthy to get a good look and telling one from another takes a bit of practice. Clubtails are notoriously similar looking, and the main way of distinguishing them involves comparing the lines on their 'shoulders'. 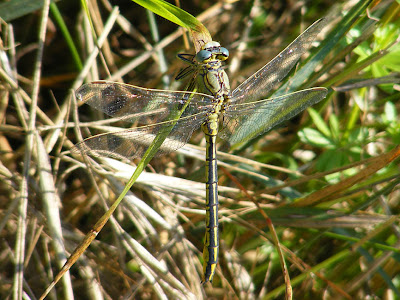 Despite its name, the male Western Clubtail Gompus pulchellus or le Gomphe joli in French ('the pretty clubtail') doesn't have as much of a clubbed tail as the other two species here. It is a more greenery-yallery colour, with pale blue eyes. The pair of black lines on the 'shoulders' are thin and the legs are yellow and black striped. There is a yellow stripe along the full length of the top of the abdomen. It is the commonest and most widespread in the area of the three species here, although with the shortest flight period. 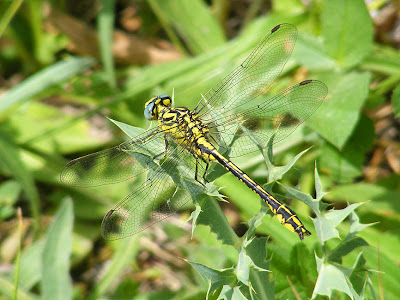 The Yellow Clubtail G. simillimus or le Gomphe semblable in French ('the similar clubtail') gained its French and scientific name because it is a thoroughly typical clubtail, best identified by excluding other possible species. It is a brighter, clearer yellow than the Western Clubtail, with blue eyes and males have quite a pronounced clubbed tail. The pair of black lines on the 'shoulders' are about equal to the yellow line between them and the legs are yellow and black striped. There is a yellow stripe along the full length of the top of the abdomen. It is locally common, but not quite so widespread as the Western Clubtail. 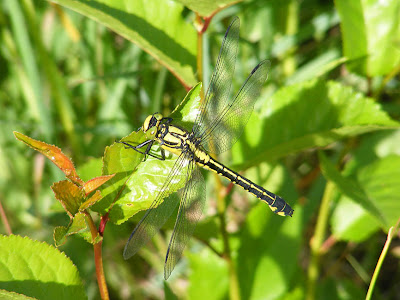 The Common Clubtail G. vulgatissimus or le Gomphe vulgaire in French ('the common clubtail') is indeed the commonest and most widespread of the three species in European terms, but is the rarest locally. Males have a very pronounced clubbed tail and green eyes (unlike the other two, which have blue eyes). It is darker than the other two, with the yellow abdominal stripe stopping short of the clubbed end. The black 'shoulder' stripes are thicker than the yellow and the legs are completely black (with no yellow stripes). 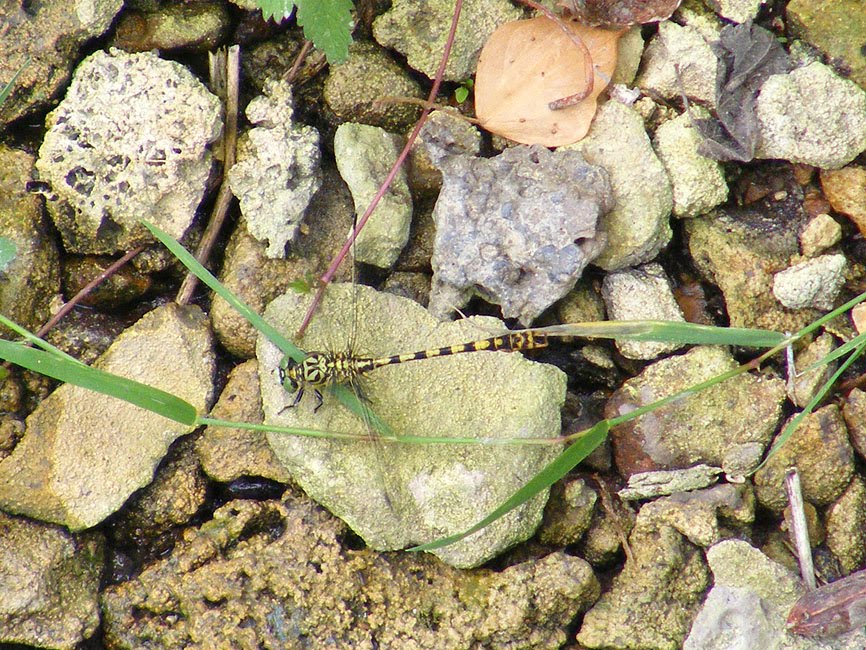 To add to the confusion, there is a closely related and similar looking species called a Small Pincertail Onychogomphus forcipatus or le Gomphe à pinces in French ('the clubtail with pliers') which you can see perched on rocks near streams. The Small Pincertail has green eyes and a broken yellow line down the abdomen. Of course, the real giveaway is the set of impressive looking hooked claspers on the end of the male's abdomen.

Female Clubtails don't have the clubbed tail, nor do female Pincertails have a set of 'pincers'.

As one Francophile and Odonata enthusast to another, I ust wanted to say hi. I still live in England but visited France earlier this year where I saw two of the three Clubtails (missed the Yellow) and the Green-eyed Hooktail for the first time.

Hi JC. The Gomphids had a good year this year, unlike many Odonts.