It is to our shame that until two weeks ago we had never been to a concert in la Roche Posay.

This is despite the fact that in September they have a three day festival of chambre music (les vacances de monsieur Haydn), a medieval festival in April, and various jazz weekends during the year. The past two years they have also had a latin music festival.

Two weeks ago we took a break from tiling and painting and stuff to spend an hour listening to music at the Festival "Images En Scène, a sort of combined music festival and exhibition of photographs of musicians. Shanna Waterstown was singing, and as Susan and I both have a penchance for the way she sings the blues it seemed the logical thing to do.

This is my photo of a fine singer in action. 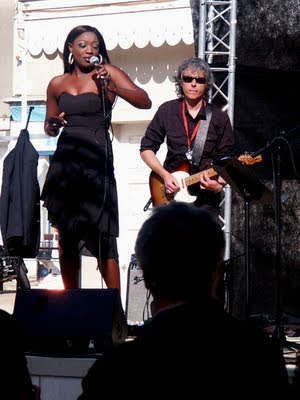 Being a photography exhibition, there was plenty of photographers in evidence, all of them looking to that perfect "art" shot. No doubt some of them managed. I think I wasn't trying hard enough - I didn't do the photographer's body language thing, nor was my lens big enough. 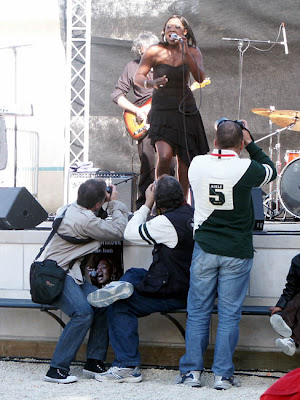 Still - it was nice to get out of the house and hear some blues sung well by someone with the right accent (she is properly from the the South).

You've written about Shanna and her music before. Hopefully she will be performing when we are chez nous and can get along to see and hear her.

Have just listened to a bit on Youtube and was impressed!

Just about to hop on you tube now but I've just come from having a drink with friends and we were discussing the concerts we have been to in Melbourne and I mentioned some you may well remember - Muddy Waters, Buddy Guy, Sonny and Brownie, John Mayall, Big Boy Arthur Cruddup, Peter Green from early Fleetwood Mac, John Hammond and Rory Gallagher are some that I've had the good fortune to have seen as they visited our city.
Leon

Simon, if you crop the top shot so that the jacket and head are out of the frame, you'll have a pretty good shot without the distraction... the top half of the picture, but leave the jacket off. Makes it more of a landscape shot though.