I have spent quite a lot of time at Chenonceau lately, and while Susan is inside the château I usually sit near (or in) Célestine.

In the carpark at Chenonceau.
Célestine always attracts attention 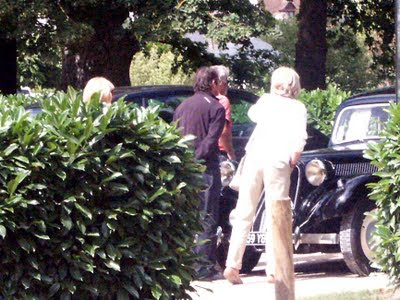 The last couple of visits I have gone off for a wander along the river or through the village, and on one such wander I ended up at the Moulin Fort at Chisseaux. Not the mill itself - according to Google Maps that would appear to have been on an island (not sure how that would work, really, as there doesn't ever appear to have been a bridge to the island) but the northern bank.

I rather suspect that the actual mill was on the southern bank associated with the weir, as the map shows a stream that looks suspiciously like a mill race, and usually a weir is necessary to keep water levels high enough to make a mill usable all the year round.

The weir and lock at Moulin Fort 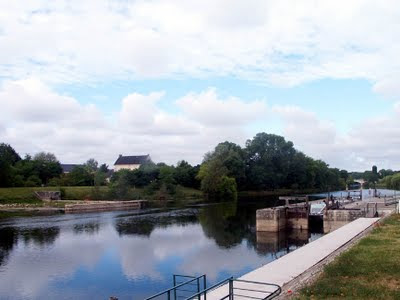 Also associated is a lock, dating from when the river was used for transport. These days the only transport on the river is the occasional canoe, and tourist sightseeing boats which run a very short course down under the chateau and back.

I have tried to discover more about this mill, but the only references on the internet are about a pair of camping sites - either side of the river - which share its name.

It's a nice place for a wander though.

On our first ever visit to the Loire valley with our children, back in 1991, we stayed with our caravan at site near Chenonceaux called Le Moulin Fort.

I can spell Chenonceau - honestly.

Well at least I can now!!