Last Tuesday we caught the train to Paris, but instead of catching the TGV we went the "touristic" route, through Amboise, Onzain, Blois and Orleans. It's a lot longer journey (2½ hours compared to 55 minutes) but has the advantage of scenery: the TGV just crosses mile after mile of flat plain dotted with wind turbines, the slow train follows the course of the Loire to Orleans.

Between Orleans and Paris the train travels alongside something strange - a long concrete viaduct. This is all that remains of Aerotrain, an experiment in hovertrains that ran from 1965 to 1977.

The test track ran for 18km 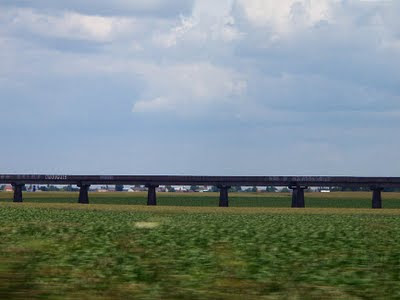 The Aerotrain was jet propelled and was a combination of wingless jet plane and hovercraft, riding on a cushion of air guided by the concrete rail. The track that remains was intended as part of a high speed service between Paris and Orleans, but the experiment ceased in 1977 when the TGV project was approved.

A 120 metre long section of track was destroyed to
construct the A19. Here is the break in the line. Today it is a curiousity, gone the way of jet powered boots, silver polo-necked sweaters and holidays on the moon: a future that never quite happened.

Click on the picture for some video of Aerotrain in action
Simon
Posted by Simon at 09:00

How interesting! I didn't know about the aero train. Thanks for the information.

Craig. I was really pleased to discover that it was the Aerotrain - especially as I was so confident in telling Susan about it. Quite how come I was so sure I am not sure...

Your 2 hour ride might have been cheaper than taking the TGV I suppose?

Nadege - because we book early we usually only pay 417 on the TGV, and the slow train is €15, so no big difference in price. It's mainly that we had never done the slow train before