It's not just grapes flowering at the end of May. The lime trees Tilia sp (aka Linden, or in French, tilleul) were covered in flowers and humming with insect activity. 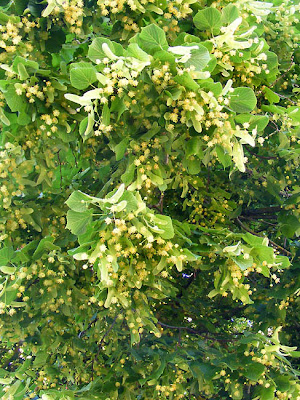 Honey bees and all sorts of other insects love lime flowers. They must be incredibly rich in nectar, and with the drought, not much else was around at the time. 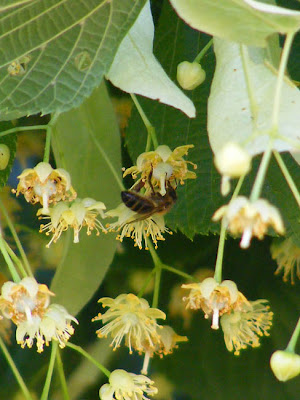 I seem to remember reading recently that miel de tilleul (lime tree honey) is particularly prized. I was interested that one of our local apiarists had miel de tilleul on the shelves of the excellent Vival mini supermarket in town before the trees had even finished flowering. I bought a jar to try it, as I don't recall ever having had it before. I like strongly flavoured honey, usually buying chataigner (chestnut) honey from the same apiarist. The lime is a very pleasant and flavourful honey, like a somewhat milder version of the chestnut, with slightly less of that bitter edge that makes chestnut so distinctive. It was a little bit expensive, at €3.90 for this small jar, so I think it might remain a once a year treat. 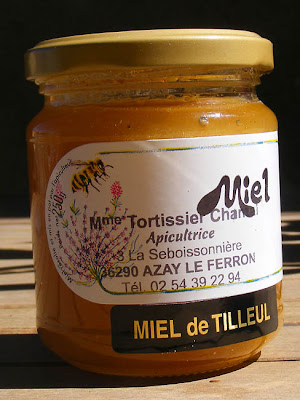 Email ThisBlogThis!Share to TwitterShare to FacebookShare to Pinterest
Labels: Food and Drink, Insects

It's amazing to stand under a tree that's buzzing so much it sounds about to lift off entirely. I'll have to look out for miel de Tilleul, I find miel de Chataigne a bit too strong for my taste so it sounds ideal. I like miel de Ronce (bramble) best, but I haven't seen any for ages. We've been told that a number of local apiarists have given up, faced not just with dying bees but with thefts of hives.

PG - do you realise that the tree in the photo is yours? Some very interesting new research into CCD has come out just in the last few weeks - looks like it's a combination of a bacteria, a virus and triggered by a stress such as adverse weather. People have had their suspicions for a while, but it has taken time to gather the empirical evidence. BTW, did you know that globally, honey bee numbers have never been higher and are increasing?