Yesterday was a big day for us - we started work on the carrelages de terres cuites on the kitchen floor.

The delivery arrives. Our neighbour Ghiselaine sent
her son Antoine to help because he is young and strong. 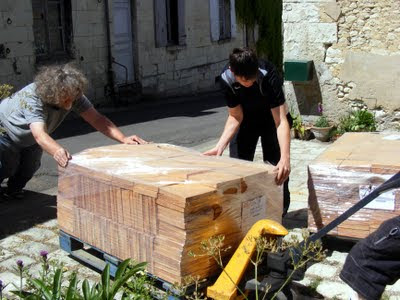 The tiles were actually delivered a couple of weeks ago and have sat in the courtyard, covered by a tarp. As mentioned before, they were bought from the same company from whom we bought the first lot of tiles, but the new tiles are machine made and not cooked quite so hard. This means they are a delicate salmon colour and squarer than the "old" tiles - no bad thing when you have so many to lay.

The first tile is laid. 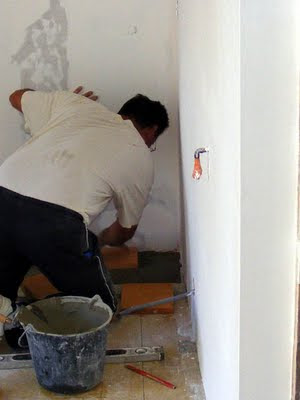 We decoded that rather than take a week to lay the tiles and end up hating each other we would ask Patrick to lay them. We had seen his work at Sylvie and Pierre-Yves house and were impressed by the finished product. At our house we were impressed how fast and neat he was.

Patrick marked the tiles and I cut them with my
new angle grinder. I have all the tools, me... 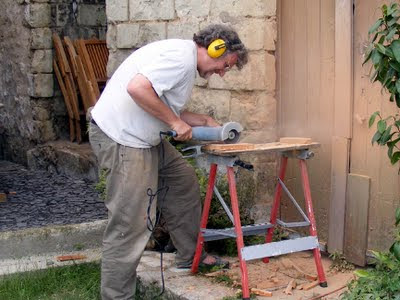 He says the tiles are a pleasure to work with, and good quality, but there are quite a few stones in the clay, and the stones are larger than he expected. This means that cutting the tiles can be a little difficult: hit a stone and the grinder throws off a shower of sparks. It also means that if the stone was near the surface of the tile when it was being cooked the suface tends to delaminate.

By the end of the day over half of the kitchen floor had tiles. 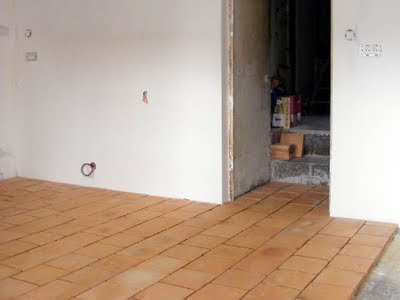 This morning he returns to lay the rest of the tiles in the kitchen. So far we have used about one-third of the tiles we bought, but hopefully we can get the dining area laid within the next few weeks as well. If we didn't have so much else to do (like buy and build the kitchen and finish the bathroom) we could even be ambitious and try to get the entry hall tiled too.

I suppose the impending visit
of houseguests is adding to
the pressure. At least you must
feel the end is in sight...or
a good part of it anyway. Tiles
look great!

this is getting very, very exciting, almost as exciting as the installation of your stair.