I started picking both sweet and sour cherries in late May, and there were some rather windy days so I thriftily picked up the windfalls too. Although not really quite ripe, they were delicious cooked up with the less perfect strawberries and a pot of rather runny strawberry jam. Great summer pudding filling, or with vanilla icecream. 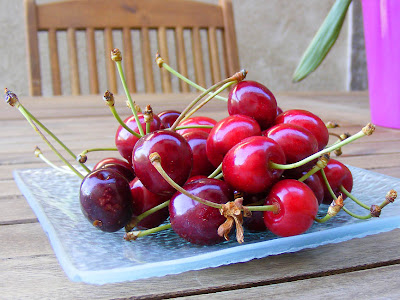 Most of the windfalls showed evidence of being attacked by Common Cherry Fruit Fly Rhagoletis cerasi (Mouche de la cerise). I'm not surprised, as I found one walking about the kitchen in early May. Cherry flies can infest cherries at all stages of development, from when the fruit is an unripe green marble, to soft and fully ripe. The later maturing varieties are much more prone to severe infestations than the early varieties. This year our latest bearing sweet cherry was all over and done with by 29 May - at least a month to 6 weeks early - so the cherry fly problem has not been very severe. 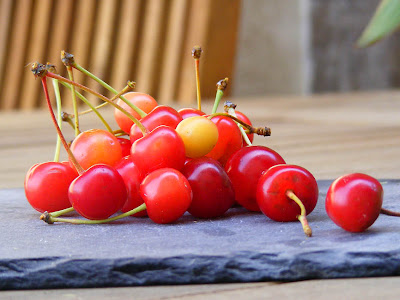 Affected fruit shows characteristic twin puncture marks where the maggot has entered and exited. When inside the fruit the maggots liquidise the flesh and suck out the nutrients, leaving a bruise which turns the fruit rotten. Once mature these larvae drop to the ground to pupate in the soil. 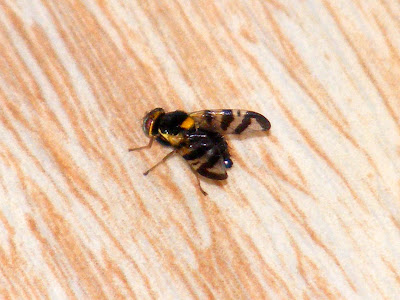 Those fruit that have been infested are more prone to falling, which is why so many of my windfalls show the signs. I'm not too bothered - if the fruit has not actually gone rotten, they taste fine and the maggots disappear if you cook them. They are not like plum sawfly maggots, which leave large amounts of unappealing frass around the stone. The ripe cherries I have picked from the tree are perfect, showing no signs at all of damage, and the windfalls are a fairly low percentage of the total crop. But the total crop of sweet cherries this year was 1.5kg, compared to tens of kilos the last two years.

Our orchard neighbours are obviously much fussier. They have a huge old yellow fruiting cherry, which they tell me they only keep because it is a beautiful tree. They never eat the fruit as they are always full of les asticots.

Susan - Is this simialr to the fruit fly we have in NSW and why we have laws forbidding bringing fruit into Victoria by the general public?
Leon

Thanks Susan.... I saw one, indoors, trying to get out of the bedroom window at the cherry opposite!
I swatted it anyway as it was too fly-like to be considered saving...?

As for the maggots.... firstly they are full of cherry juice anyway... and secondly, there is no such thing as a vegetarian option with organically grown produce!! Besides, perhaps they are waht make the big cherries taste so meaty!?

Leon: similar. It's a major pest of commercial cherry orchards in Europe, but it is native, so border controls are not the solution.

Tim: you should have photographed it before swatting - there are lots of lookalikes.