Bright still days in September and February are the very best for photographing châteaux in our experience. The light is clear, the sky is often startlingly blue, and the vegetation is not so lush as to obscure. 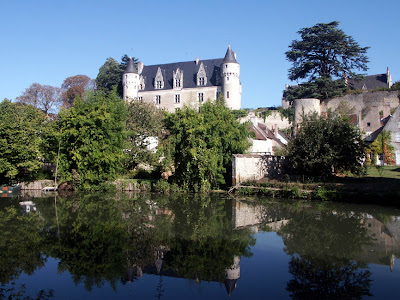 The château at Montrésor appears surprisingly rarely in online photograph albums taken from across the river. This view is how it is presented by the Tourist Office, but it seems visitors don't always realise that a walk along the balcons (water meadows) is one of the highlights of an outing to Montrésor.

Montrésor means 'treasure mountain' and the name comes from a romantic legend which also introduces us to one of the royal symbols of France, the Fire Salamander. According to the legend, a grandson of Clovis was traveling with a young attendant. They stopped to wash at the base of a great rock. To his horror, the Prince suddenly realised he had a 'lizard' clinging to his face! The galant equerry removed the 'lizard' and placed it on the rock, whereupon it disappeared into a small crevice. A short time later it re-emerged and to their amazement it was now a fiery gold colour. Intrigued, they enlarged the gap in the rock and followed the 'lizard' back down a passageway into a vast underground chamber which was full of treasure. Now fabulously wealthy, the Prince built the castle on the rock and named it Montrésor. He gave a share of the treasure to his young attendant and made him the governor of the castle, enabling him to marry the previously unattainable beautiful princess with whom he was in love. 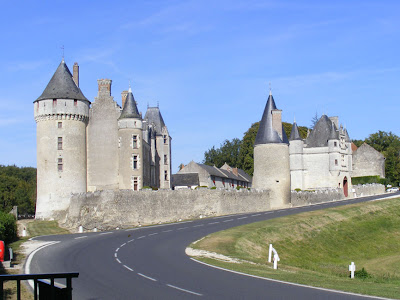 Montpoupon appears as you round a corner on the D764. Many visitors to the Loire Valley discover it by accident and are blown away by the sudden and spectacular view you get. It's well worth doing more than just stopping at the neighbouring Auberge and photographing the château from the bridge (as we have done here). The gatehouse contains a library and chapel; the main building displays furnished rooms with decorative schemes and furniture a melange from the 16th to the 19th centuries; the stables contain a hunting museum with too many trophy heads for modern tastes, but some amusing cartoons which take the mick out of the hunting fraternity; the kitchen is set up as in the late 19th or early 20th century, with one or two rather unusual objects. We are considering taking out an annual subscription, which is extremely good value – allowing us to visit whenever we like for less than the price of two ordinary visits.

Email ThisBlogThis!Share to TwitterShare to FacebookShare to Pinterest
Labels: Loches and area, Montrésor, Pictures of Chateaux, Towns and Villages near Preuilly

We particularly enjoyed the kitchen at Montpoupon, with the little 'mise en scène' of the kitten that broke an egg. Did you notice it too? Martine