I am learning all the time!

I mentioned yesterday that Célestine and I were having some issues.

I decided to have a shot at sorting them out, so after a cup of coffee I fitted up my work lights in the garage, and started having a think whilst jiggling things on the motor (sometimes it works).

The "old" fuel filter. In three weeks
it totally blocked up 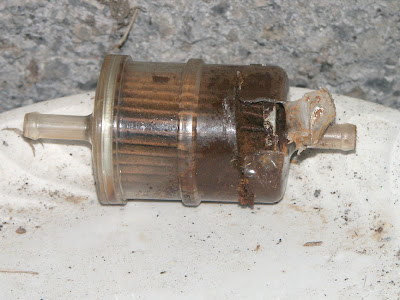 My first issue was why there was no fuel being pulled into the new filter I had fitted, so I got bold, removed the line out from the filter and started sucking. I managed to get fuel coming into the filter without getting any in my mouth (a miracle), then refitted the hose.

I then tried starting the car - no luck.

At that stage I emailed the garage in Descartes who fitted the alternator. Twenty minutes later I received a reply about priming the pump, and also saying that if I emailed back, he would come out to Preuilly.

My next step was to remove the air filter and splash some fuel directly into the carburettor. HOORAY!! Car started, but then stopped. I was amazed at this because I had been trying to 24 hours to start the car, and the battery still wasn't dead.

I kept splashing fuel into the carburettor in the hope that the pump would force some fuel in and all would be well. It wasn't.

I mailed this information back to the garage, and after lunch M. Musseau arrived. He did all sorts of stuff, including cleaning and rebuilding the carburettor, cleaning out hoses and testing the pump. He got the car working, but only by putting a fuel line into a jerrycan - the fuel tank was seized solid.

And that is how I drove it to Descartes: jerrycan strapped to the front passenger's seat, with the fuel pipe sneaking across my legs, and through the heater vent to the fuel pump. 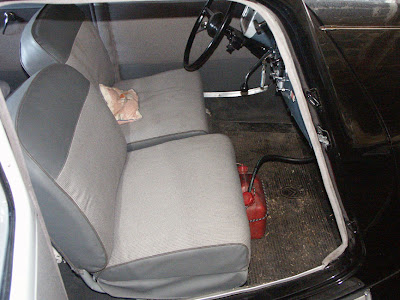 It was a nice day for a drive though - even if I did have an open jerrycan sitting next to me while I was doing it. I found that I was grinning like the Cheshire Cat even in those conditions. I also learnt that if you leave the ignition on for a long time the ignition coil overheats, and the car won't start - and that the old coil in the boot still works.

When we got to descartes the car went straight over the inspection pit. We checked out the noisy exhaust as well as the fuel tank fittings. M. Musseau will be removing the tank, cleaning it, and treating the inside with a "product" (not sure if it's an epoxy or something more modern). He will also weld a crack in the exhaust pipe. I like M. Musseau's attitude: he likes the car, therefore I am allowed into the workshop and into the inspection pit, and even if I don't fully comprehend, he tells me stuff. 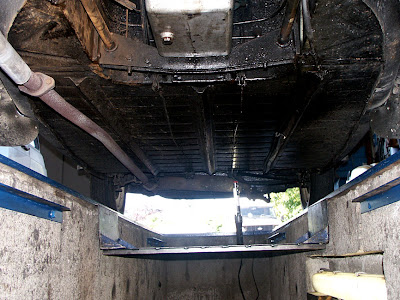 I have to say a huge thank you to John, who followed me to Descartes and bought me home again.

When Nick had his old Triumph Bonneville if he went any distance I used to follow behind in the car with a box full of special tools and spares.
The lights were never right. If he went over a bump they would go out. At the next bump they came back on.
If he was out on it by himself and the phone rang I used to answer "International Rescue".

The problem you have is a common old bike/car one and unfortunately generally doesn't just go away with a few tankfulls. You need to get the inside of the fuel tank coated with a petrol resistant resin. Its easy to do, you can buy the stuff quite easilly at old bike/car parts suppliers, just tip it in and swill it around. The tricky part particularly with cars is getting the tank off (and then back on again).

To get into this state Celestine has obviously stood for some time and a similar problem can affect any fluid holding components, so I'd strip and check things like the brake master cylinder, carb float bowl, etc. and make sure hey are clean and corrosion free.

Don't loose faith or enthusiasm. You're just helping Celestine make the transition from museum piece to daily transport, and anything that moves, has fluid or electrickery involved will need some tlc. As you solve these little growing pains, the bond will form and Celestine will give you many years of reliable, faithful service.

Plus a few skinned knuckles.

Thanks for that - not losing faith, just peeved. I knew these things would happen, just that I didn't want them to. I like driving her too much!

The garagiste is resining the tank as I type (obviously not EXACTLY as we speak...), cleaning the fuel lines etc. I expect the brake fluid will need replacing next, but I can do that, if I remember how!!