On Saturday night we attended the mediaeval feast put on by the local history society to coincide with the Journées du Patrimoine. The entertainment was provided by a re-enactment troupe of musicians and singers who acquitted themselves rather well. 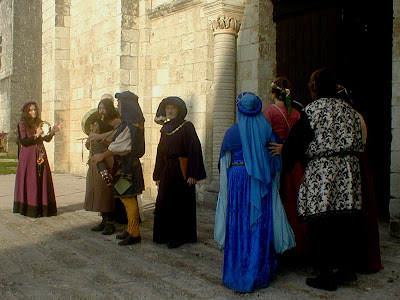 The evening started by gathering at the front of the abbey, then moving on to the terrace of the Poterne (château gatehouse and now museum). Apparently the dinner itself was held on the terrace last year, but it was freezing, so it was moved indoors this year.

We were introduced to a number of people, including several connected to the Communauté des Communes. This is a voluntary intermediary level of public administration which is funded by the businesses of the area and whose focus is to improve the physical and economic environment of the member communes. I made slightly more of an impression than is strictly necessary on the man responsible for tourism in the area by hitting my head on a low beam and bouncing backwards into his arms. He was perfectly charming about it and made sure to check on my well-being several times during the evening. 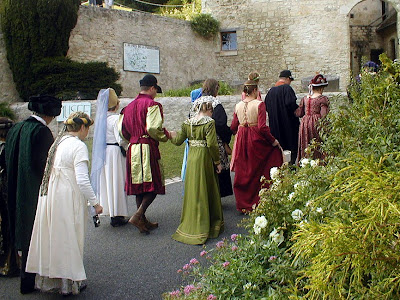 I was really impressed by how many grown men were prepared to dress up in tights and dresses and walk around town. They were clearly having a great time, and it wasn't the alcohol fueling the bonhomie, although we all had a glass or two of spiced red wine at the Poterne.

From there we progressed to the function room at l'Image, which Simon and I have never been in before. It's a long room, with nicely restored pierre apparente walls decorated with traditional hunting trophies (deer skulls, legs bent to form hooks for garlands, hooves with the leg hide braided). There is also a large fireplace, decorated with a Protestant text from the aftermath of the Wars of Religion, when Preuilly's richest citizen and a significant number of local families were either imprisoned, forced to abjure their faith or go 'underground'. 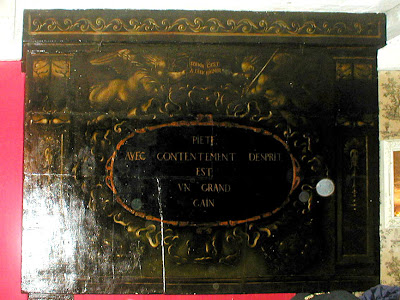 Chef Jean-Michel Chedozeau created a special menu for the night (I suspect he really enjoys this sort of event, where he can do something a bit different).

First course was a pork and vegetable terrine flavoured with nutmeg, dressed with saffron flavoured swede and accompanied by stewed potimarron (a type of small pumpkin, very popular in France), flavoured with ginger and topped with pickled cherries. The pumpkin cherry combo was absolutely delicious. Following this was sturgeon in a rich sauce seasoned with juniper and cloves (very tasty), served with cumin spiced green lentils and leeks wrapped in bacon. Both the lentils and leeks were left by many people, who said the lentils were too spicy and that the portion was too big. We thought the leeks were delicious, and were interested by the 'too spicy' comment about the lentils. As far as we were concerned, the lentils were much as I would normally cook them (I'm a big fan of cumin). In fact, the sauce on the fish was spicier, and far more dominant than the touch of cumin in the lentils, but the fish got a very positive review from everyone. Then there was fromage frais with herbs, served with a perfectly ripe half fig. Once again, many people felt the herbs in the cheese (the chives, in particular) were too strong. The woman opposite me said that she really only liked fromage frais nature (plain). I'm sure Jean-Michel had done his homework and was presenting as good a representation of the mediaeval diet as he could, but modern Tourangelle food, whilst it is often robust and hearty, is also quite delicately flavoured and many people do not like more than a hint of herbs and spices.

I think everyone loved the dessert though. It was a glass cup with stewed apple on one side and stewed rhubarb on the other, topped with chestnut cream, a slice of pain d'épice and dried fruits. Scrumptious.

Simon and I were seated between two men both called Jean-Paul, opposite a woman called Jeanne and our friend John. To facilitate conversation the Jean-Paul to my right said that he would be Jean-Paul Un and so the man to Simon's left became Jean-Paul Deux. John was dubbed Jean Simple. Jeanne said that her husband's name was also Jean-Paul, but because it was such a common name, he never used it, and was just Jean. Simon drank enough to attempt complicated French with Jean-Paul Deux, who reads the blog and wanted to know all about Célestine. I was mindful that I had hit my head hard enough to possibly be concussed, so didn't drink anything but water.

Jeanne and her friend Mme Blaszyk (seated opposite Jean-Paul Un) are members of the choral group that was providing the entertainment, and although not part of the troupe working that night, sang along for their own pleasure, including taking parts in the rounds and harmonies, which was lovely. Jean-Paul Un plonked a great big cast iron key on the table and explained that it was his front door key. I expect he didn't want it wearing a hole in his coat pocket - it was at least 15cm long with a shaft thicker than a pencil. There was the inevitable round of jokes about chastity belts and someone asked if it was the key to paradise.

A lot of people (particularly Bernard de la Motte and Marc Dimanche) worked very hard at making this event the enjoyable occasion it was. We look forward to attending and being more involved next year.

Those Journées du patrimoine are very exciting. I think it was Malraux' idea. They make people aware of how much their past is part of their present and of their future.

For the last fifty years or so there has been great changes in people's attitude and in the way they look at their environment.

Those villages of any size which were nothing to write home about are now well kept with lots and lots of flowers, and very welcoming. Great changes, indeed!

I'm glad you enjoyed yourself now that you are truly Preuilliaciens! I guess you can't wait for next year!

Sounds like you had a great time. Keeping up in French for a whole evening can be hard work but at least you had a good dinner to sustain you. !!