On My Own Again

For the past couple of years, most of the time I have spent in Preuilly I have been on my own. Susan was working in London and I was working on the house. Then we moved here permanently, and since then it has been Susan and I all the time. Well - this week she is back in the UK working (at Stratford upon Avon) and I am at home.

I have been busy, too - I dropped Susan off at Tours airport on Monday afternoon, and since then I feel like I havent stopped. I have made huge amounts of pasta sauce to freeze and a batch of peach jam. I also tried (unsucessfully) to dry some tomatoes. Ever since Susan washed the numbers off the temperature knob of the oven it has been difficult to know what heat you are using. Whatever heat I was using was too much. In addition I found time to go down to the potager and pick up a couple of wheelbarrow loads of windfalls and put them on the compost heap.

It's a bit sad - a compost heap of apples and peaches. 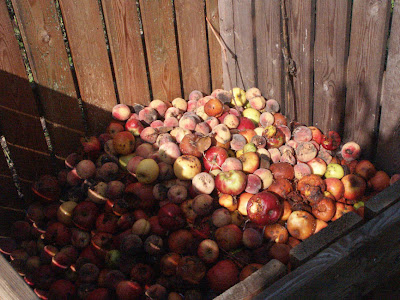 I also took the opportunity to change the fuel filter on Célestine. This was not as straightforward as I hoped, and at the moment I can't get her started (again). The fuel pump is mechanical and only works when the engine is running, and because I have broken the vacuum in the fuel line I can't get the fuel flowing again. This is peeving, but hopefully it will be a quick fix when I work out what to do. I will be changing the fuel filter fairly often, as the fuel tank has a rust issue I hope will sort itself out after a couple of changes.

Under the bonnet. You can see the
old fuel filter centre left 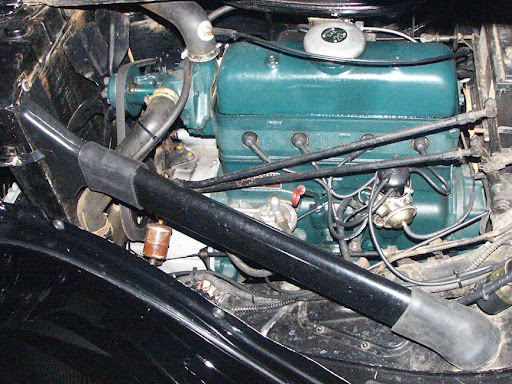 Alex mowing the orchard. After a foggy
start the day turned really nice. 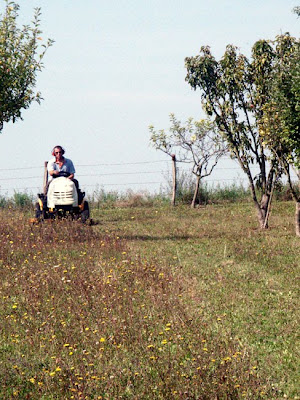 Hopefully that will be the last mow of the year. Next job in the orchard is to prune the cherry trees and pick grapes.

No rest for the wicked...

Email ThisBlogThis!Share to TwitterShare to FacebookShare to Pinterest
Labels: le Jardin, The Car and Driving

Simon
I bought an oven thermometer and found the actual temp was well above the dial label, which explains two years of overdone cakes and roasts. So one of those might be a worthwhile investment--they're only about AUD9 here in Australia.
Noel

You scientists - you'd take all the fun out of burning stuff if given a chance... The temperatures are marked in 30 degree gradients (I think) so I dunno if we'd ever get it spot on!

It's nice to see your blog. I've been really busy since late August + been overseas, so I've had no time to drop over here at Preuilly.

It looks like you won't be bored stiff during Susan's absence, so "Bon courage".

Word verification is vocana. Barbara will realise how apt that nearly is!