We have an awful lot to talk about!

Célestine is a 1953 Paris built Citroën Traction Avant 11cv Normale, also know as the 11b, or the 11bn. The 11 refers to the the fiscal horsepower, the "b" is for Berline, or sedan. There is a bl - the Berline Légère, or light saloon. (Confusingly, in the UK, where the Traction avant was also made, these cars are know as the Citroën15 and Light 15, because the taxable horsepower calculation in the UK was different. Then there is the whole matter of the six cylinder 15/6, known in the UK as the Big 15)

The whole Citroën Traction Avant thing started in 1935 with the 7A, the world's first mass produced front wheel drive, all welded monocoque construction car with independent front wheel suspension. This car was later given a larger engine and became the 11bl, and a larger bodied version was made which became the 11B. If you want more detail here is the place.

Celestine was found in a farmyard a number of years ago (some time this century, but we will have to check when exactly). She was in a bit of a state, but was rebuilt from the ground up in 2006. Very generously Monsieur S has given us some photos of the work.

The doors form part of the monocoque. Here they are being
repanelled and welded. 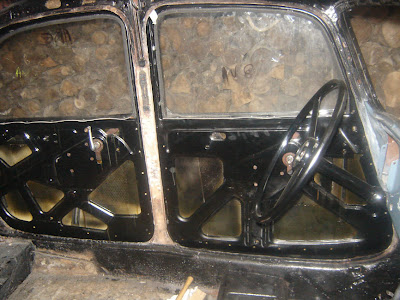 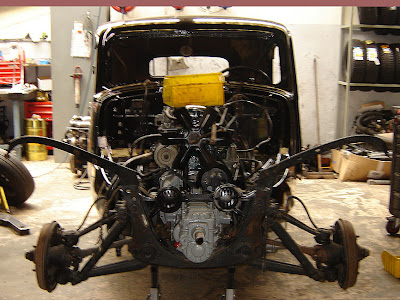 One of the reasons for chosing an 11b is the enormous amount of legroom in the back seats. Even with the drivers seat having been moved back for me by 20cm (8 inches) the back legroom can be measured in acres. The other main reason is that you can still get the parts - most parts - just by picking up the phone, and most garagistes can still do the work (and are happy to do so). The fact that it makes us feel like gangsters/spies/movie stars (depending on mood) has nothing to do with it. At all.

Driving it is interesting - people wave and flash their headlights, and pedestrians turn and look. This is unusually (and somewhat unfortunately) a cue for me to crunch the gearbox changing from first to second. No synchro, you see, and it takes getting used to.

I mentioned on Friday evening that we had an interesting trip from Nemours. This is down to the way the car starts.

First you have to be in neutral. No first gear with foot on the clutch here, definitely neutral. Then you put the key in the lock and turn clockwise. This is "contact". Next the choke (in French starter) is pulled out oh so much, then you pull the démarrer button. This will start the car.

Failing to get contact before you pull the démarrer will quickly result in a flat battery - as happened to us on the forecourt of the filling station not 300 metres from the garage where we bought Célestine. Luckily, a phone call bought Monseuir S out (in a 2cv) to rescue us will one of those battery booster pack things. Not that it was embarrassing in any way, shape or form whatsoever. In future we will have to think back to all those old flying movies, where the pilot calls out "contact" before the prop is swung. 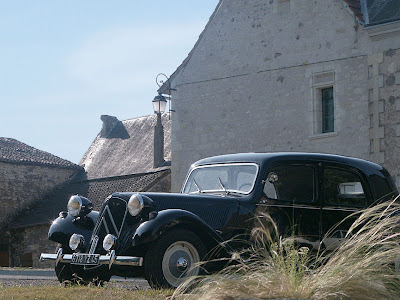 We picked up Geoff and Pat at Poitiers airport yesterday, and Célestine made a huge splash - everybody turned and looked, people commented, and we even had a cyclist turning around to take a photo on his phone camera as we followed him down the road.

Unfortunately, we were pootling so casually we weren't revving hard enough to recharge the battery, so when we got home the poor old girl was flat out of puff. This means tomorrow we will be buying a charger so we don't embarrass ourselves in future.

Beautiful old car, lovely photo.
There are bound to be a few interesting moments until you get to know what keeps Celestine happy.

is she named after the gillian tindall book, one of the best i've ever read about the french??

Jean
I was pretty stressed about the old girl the past couple of days - she is a huge responsibility!