While I am in France and subject to French TV I will be doing some reading. These are a few of the books I am taking with me: 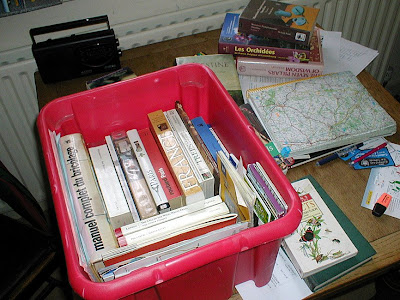 Celestine: Voices from a French Village by Gillian Tindall.
Gillian Tindall bought a house in Chassignolles, just south of La Chatre, and discovered some old letters there. This promted her to research the family (and in particular the Celestine of the title) and through them French village life through the ages. A lovely and informative book.

Almost French, A New Life in Paris by Sarah Turnbull.
Sarah Turnbull grew up in the same town as me in Australia (Canberra), travelled to Europe on holiday and ended up staying, getting married to a Frenchman, and living in Paris. A useful sort of guide to living in France that covers things we really need to know - like why Parisian women don't wear tracksuit pants to go shopping (it is not nice for the baker).

The Piano Shop on the Left Bank: The Hidden World of a Paris Atelier by T.E. Carhart.
An American (and lasped pianist) discovers a piano workshop near to where he lives in Paris. A really nice gentle book about getting to know the French.

The above books were really quite important to me when we were deciding where to move to - the French have a certain reputation, but these books showed that it needn't be all hassle and turmoil being a foreigner in France.

Guidebooks: I will be carrying more of these than is usual, as Susan's parents will be with us and everybody has their own favorite.

The Rough Guide to French Hotels and Restaurants.
A translation into English of "le guide du routard", which I consider to be the best of the cheap but good bed and food guides you can get for France. Indispensable, thoroughly reliable. I have an old copy of Routard Paris in French that I still use.

DK Eyewitness Travel Guide: France.
Really good on the places it covers, with nice pictures that make you want to visit. Not so good on the basis that there are huge holes in it's coverage. Good info on regional foods and wines. The main problem with Eyewitness books is that they weight a tonne. I will also be carrying the Paris version

Lonely Planet: France.
Yes, there has been some "scandal" about the lonely Planet books, but that has mainly been about the restaurant and hotel recommendations - for which I use Routard anyway. Reliable on factual info about places we might like to visit, and that's all I ask.

The Rough Guide to France.
Once again, useful on places to visit, I dont really use the rest of it that much

I will also be carrying Fodors, which I don't really rate (it appears to be aimed at people from midwest USA who have just sold their hardware store) but someone might find useful.

Catchup reading and books I read and re-read:

The Seven Pillars of Wisdom by T.E Lawrence.
Lawrence of Arabia's take on World War 1 and the Middle East crisis. Susan bought this for me in hardback about 15 years ago, and I have never quite got around to reading it.

Herodotus - The Histories, Robin Waterfield (Translator).
A brilliant translation of a book that proves that nothing changes.... I bought this when teaching in Korea and love it. I also carry Plutarch - Greek Lives and Thucydides History of the Peloponnesian War for the same reasons.

White Fang and The Call of the Wild by Jack London.
It's Jack London. There is no excuse necessary for reading this.

Sherlock Holmes: Original Illustrated "Strand" Edition: The Complete Stories by Sir Arthur Conan Doyle
'Nuff said. I bought this in Hawaii 10 years ago and have just about worn it out.

Monsieur Pamplemousse Omnibus Volume 3 by Michael Bond.
Everyone knows Paddington Bear, but few people seem to have heard of M.Pamplemousse and his trusty hound Pomme-Frites, which is a pity. M.Pamplemousse is an ex-Paris policeman who now writes for a food guide (in between adventures, naturally). Funny stuff.

I also have various handyman books in French and English, dictionaries, and Susan has a ginormous pile of bird, flower, tree and insect books as well.