I developed this recipe after I bought some walnut oil from a local small scale producer at the market in Preuilly. The oil was bottled in recycled plastic water bottles, and turned out to be so strongly flavoured that it completely overpowered any salad it dressed. But it had not been cheap, and I didn't want to leave it to go rancid. So, what to do with it? Then a neighbour gave me a bag of walnuts and I thought I would experiment with a walnut cake. This is a recipe for autumn abundance and I included pears because they often need using quickly in season.

I first roasted the walnuts in their shells in the oven at 180°C for about 10 minutes. Once they were cool enough to handle, I extracted the nuts by holding the stalk end of the shell down on the wooden chopping board and giving the pointy end a sharp tap with the meat tenderiser. This usually splits the shell neatly in half and allows you to extract the nut either entire or as two nice halves. Don't do this on a prized or expensive board, as it does damage the board (and the meat mallet if it is wooden). Once the nuts are out of the shell you have to pick out the woody membrane that will be entangled within the nobbly lobes. 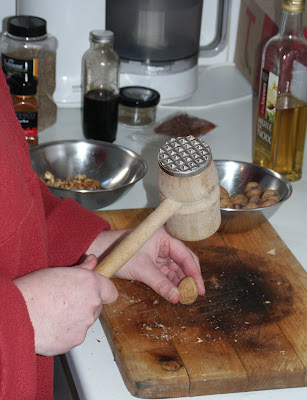 The recipe makes a rather dense cake which keeps well and is actually better on the day after baking. Very easy, and quick to prepare except for the nuts (and you can 'cheat' by buying ready prepared nuts – buy walnut pieces rather than halves, as they will be cheaper and make no difference to the cake).

Method
1. Preheat the oven to 180°C. Line a 30cm square cake tin with silica baking paper.
2. Beat the oil and sugar until thoroughly combined, then beat in the eggs.
3. Mix in the spice and flour, then the pears, sultanas and nuts.
4. Pour the mixture into the prepared tin and bake for 55 minutes.
5. Cool the cake in the tin on a wire rack.
6. Turn the cake out onto a board when cold and cut into 25 squares. 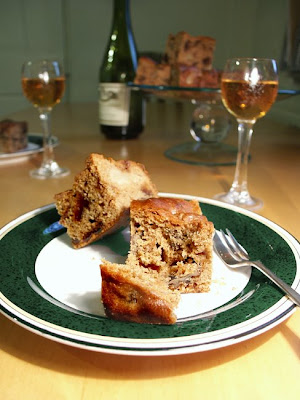 The cake sounds and looks delicious. I like a cake that uses oil instead of butter.

I did see an error in the recipe--you said 25 squares, but in our house that would be two slices.

In France it's OK to eat as much cake as you like - every town is required by law to have a shop selling cake and because you also eat more salad than a hutch full of rabbits, it all balances out and is OK. Isn't that what Mireille Guiliano said in Why Frenchwomen don't get Fat? Something like that, I'm sure...
Susan

If I drank as much champagne as Mireille Guiliano must get to drink,
I too would be very very happy and energetic, and with a metabolism to process lots of cake. Pastries. Cheeses. All kinds of breads.

It must be lunchtime. I wonder if there's any cake hiding around here....

Who needs champagne? Crémant de Loire is better and cheaper :-) If you make the cake, email me to let me know how you got on with the recipe - I'm keen to get feedback.
Susan

this recipe of jane grigson's for burgundian walnut (and walnut oil) bread (from Good Things) is one of my top 30 recipes of all times.

Thanks for the recipe link. I'll try it one day and let you know what I think. It does look a good way to use this strong oil.
Susan