This little fly is unmistakeable in appearance and distinctive in behaviour. As often seen indoors as out, the Flutter Fly parades across the wall as though performing some sort of marching routine - ten paces forward, sharp right turn, ten paces forward...all the while gently waving the tortoiseshell patterned wings. (Simon, who photographed this one's show in our house in Preuilly, reckons they look more like bakelite than tortoiseshell.) 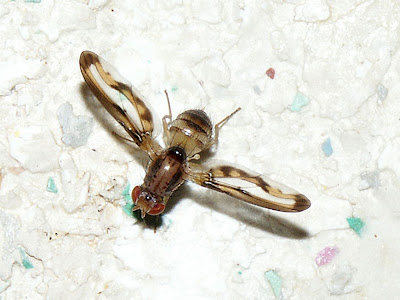 The ecologist and dipterist, David Clements, says about this species in his 1997 paper on Picture-winged Flies for the Dipterists Forum:

'A readily identifiable species...Well-known for coming into houses. I used to have this species coming into the living room of my house in Cirencester in mid-summer, where it would be found marching in stately fashion across the pale emulsioned walls, alternately waving its strongly-marked wings with marching-band precision. Every now and again it would stop, wave a wing, make a quarter-turn and set off in a new direction. The room had windows which opened onto a small garden surrounded by a beech hedge, and was quite close to the woodlands of Cirencester Park...Moderately common and widespread.'

The naming of names:

Strange looking creature. I don't recall ever seeing one of these indoors. Simon's beautiful photo enhances the beauty of that little beast, particularly it's wings. Insects are not a specialty of mine, but I'll keep an eye for this one, especially for it's peculiar behavior. Once again, very good post.

They are tiny, but well worth some minutes of observation time if one appears in your house.
Susan