The oldest chateau in Preuilly and once seat of the Barons of Preuilly, the Chateau du Lion has a long and chequered history.

The first castle on the site was built by the first known Baron of Preuilly - Atton - in the 9th century. Nothing of this structure remains, as in keeping with most defensive works of the time it was a mound of earth topped with wooden walls.

During the 10th and 11th centuries the castle was reinforced with masonry, but then was destroyed by Foulques of Anjou (presumably Fulks III). Preuilly is in an area that during the 100 Year Warwas on the borders of English and French territories. Work was done by the English on the castle to make it a secure base for carrying out incursions into the the French territories. In 1369 Bertrand du Guesclin and Jean de Bueil (Jean III) ended the English occupation and returned the castle to its previous owner Eschivart VI, Baron of Preuilly.

In 1422, the work of enlarging the fortification and repairing the damage done during the 100 Years War started. This work was extremely expensive but was made more economical by taking materials from houses owned by the abbey. By 1535 the castle was described as having "80 rooms with chimneys and more, and rooms and kitchens, barns, cattle sheds and various entries."
The old curtain wall of the chateau 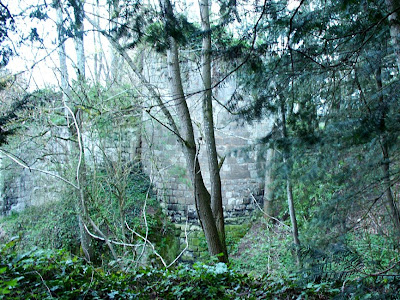 In 1562, (the wars of religion) the Protestant owned castle fell to Chesne-Brulé, governor of Angles (sur-Anglin). Serious damage was done, most obviously to the chapel Ste Mélaine.By 1761, the castle was in poor repair, and in 1769 was rented to a peasant to be used as barn. In 1803, Michel de Young bought the lands of the Barony of Preuilly and undertook to sell the stones and beams and by the beginning of the 19th century, the castle was nothing more than a building material warehouse. In 1816, the mayor Mr. Delatramblais decided to allow the ditches of the northern side to be filled to allow the building of a new road to Tours.

At the beginning of the 20th century (in 1905-1906) the castle, by then property of the Cartier family, was rebuilt (in a style described by the Preuilly Archeological Society as "at the very least debatable") but at least it stopped the destruction of what remained. The Chateau is now a private home, and is not open to the public. 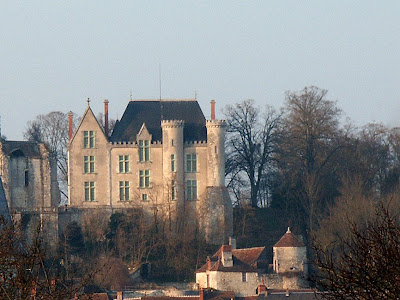 The Postern (gate house) is now the Preuilly museum, having been donated to the town in 1966 by the Carter Family.

PS It's snowing properly today in London. For some reason it seems apt, considering the controversy about the Olympic Flame, which is also in London today. The Flame goes to Paris tomorrow, which some consider to be rubbing salt in the wound.
Posted by Simon at 10:00

The first picture makes me think of like the chateau "de la Belle au Bois-Dormant", Sleeping Beauty, should have looked before the coming of Prince Charming.

You're right, and that part of the chateau IS a sleeping beauty. You have to look really hard to find any evidence chateau isn't just a 19th century confection. The low, hidden walls are really all that remains.

A more recent Prince Charming might have been met with a more domestic scene when surveying the turrets from near the postern. A local inhabitant can rememember when the local washerwoman would have had her washing strung out on the terrace in front of the postern. In those days she washed down at the river lavoir and then carted it all up to the postern for drying and ironing. Two families raised their children there then, although I cannot find out which particular parts of the postern were in use. Clearly one front door (now blocked) led out onto the terrace.
Jill & John

It is astonishing now to think that 3 out of 4 towns and villages in France didn't have municipal water until the mid-1960s. My boss can remember visiting France as a child in the sixties and seeing women doing the laundry in a lavoir. When they closed, many women missed them for the social contact they gave.
Susan