In the little aboretum attached to la chapelle de tous les saints in Preuilly there are two Cedars, planted so close that their trunks almost touch. They are clearly different in appearance, but are they different species? 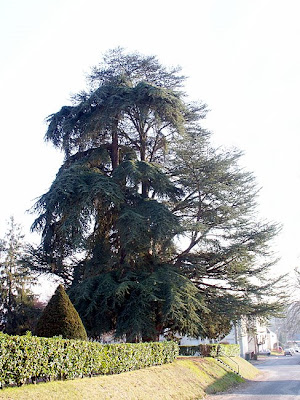 True Cedars (Cedrus spp) are complicated taxonomically, and difficult to identify with any confidence by amateurs. Even botanists are still arguing about whether there are two species or four, and there are several varieties of the most famous species, the majestic and romantic Cedar of Lebanon.

The website for the trees of note in Indre et Loire lists these two as Cèdre de l'Atlas C atlantica and Cèdre du Liban C libani - but which is which? And why are they planted so close together? Goodness only knows what the gardener was thinking at the time - surely they must have realised that as Cedrus, whatever species, the seedlings they settled into their new home were destined to be enormous trees?

Cedar of Lebanon is native to Turkey, Syria and Lebanon. It is often seen as a park tree in Europe. They grow up to 40m and are conical when young, only developing the characteristic massive trunks and heavy horizontal branches with flat 'shelves' of foliage with age. The most famous Cedar forest in their native Lebanon is the Arz ar Rab, a group of 300 or so miraculous survivors - some 1500 years old. It is a World Heritage site. A cedar features on the Lebanese flag and they are spoken of in the Bible, travellers' accounts and Arabic and European poetry throughout the ages, acting as powerful symbols of strength and constancy in a beleagered land for centuries. 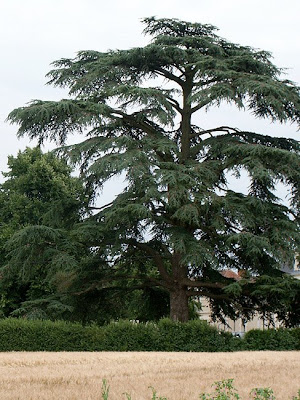 The first Cedars of Lebanon are said to have been brought to France with Louis VII (Eleanor of Acquitaine's first husband) when he returned from the Second Crusade. He had them planted on the hillside overlooking Vitry-sur-Marne in Champagne, as part of his penitence for the burning alive in the church of 1300 citizens of the town in the course of a disagreement with Count Theobald (the Great) of Blois and Champagne. The descendents of these seedlings grow there to this day.

I think the biggest Cedar of Lebanon I have seen is in the courtyard of the Musée des Beaux Arts in Tours. If you come in off the street and stand in the gateway, the tree gives the appearance of being as wide as it is high, and its lower branches are all supported on sturdy crutches. It takes up almost the entire courtyard. The pictures on the 'Trees of Note' website don't convey its sheer massiveness, but there is an interesting newspaper clipping included (in French).

The species has a reputation for losing branches in strong winds and several prominent families have their version of the legend that predicts a death whenever a branch falls from the Cedar on their front lawn.

Curiously, Cedars of Lebanon didn't appear in Britain until the 17th century.

The Atlas Cedar, granted full species status by many, but still considered to be a variety of C libani by others, is native to the upper slopes of the Atlas and Rif Mountains in North Africa (Algeria and Morocco). It is surprisingly tolerant of chalky soils, probably because it likes to be extremely well drained, and is normally grown from seed. The whole plant is aromatic and it also tolerates atmospheric pollution. This cedar did not appear in Europe until the mid-19th century.

To see another Cedar species, go to our blogger 'neighbour' Ken at Living the Life in Saint-Aignan. His mystery tree has finally be identified by Dr Dawn Edwards of the Royal Horticultural Society as Cedrus deodarus Deodar or Himalayan Cedar. Turns out he's also got an Atlas Cedar too, which also took a while to put a name to.

PS The Cedar of Lebanon in the Preuilly arboretum is the darkly drooping tree at the front and the Atlas Cedar is the more glaucous and airy tree behind.
Posted by Susan at 10:00

So I got my Lebanon Cedar after all, even if it is glaucus. Now that third tree: it was somebody's living Christmas tree, I understand, and was planted in the back garden after Christmas all those years ago.

Thanks to Dawn Edwards for the identification.

If it was a Christmas tree, then the chances are it is Norway Spruce Picea abies subsp abies.
Susan