Today is ANZAC Day: the day on which Australians and New Zealanders remember their war dead.

This is the main Australian First World War War Memorial at Villers-Bretonneux, about 20km east of Amiens on the road between Villers-Bretonneux and Corbie. The memorial was designed by Sir Edwin Lutyens. On the walls of the memorial are inscribed the names of the 10,770 Australians who died on the Western Front; the battlefields of the Somme, Arras, the German advance of 1918 and the Advance to Victory. 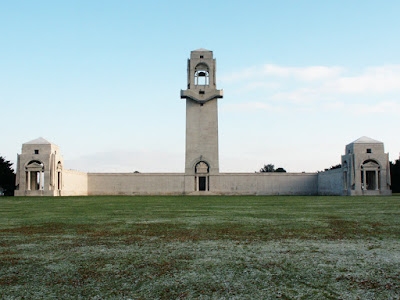 The War Memorial stands inside the Villers-Bretonneux Military Cemetery which is the burial place of 2,141 Commonwealth servicemen, including 608 "Known unto God" (unidentified) dead. 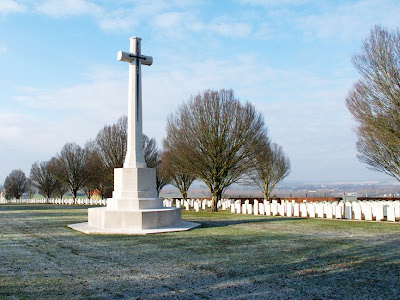 The cemetery is administed and beautifully maintained by the Commonwealth War Graves Commission, a British charity.

About ANZAC Day, you might be interested in checking these two sites:
www.somme-tourisme.com
www.historial.org
They are in French, but I'm sure you won't have any problem.

Also this story http://news.smh.com.au/diggers-cross-returns-to-french-village/20080424-289q.html (thanks to Frogsmoke for the link)
Susan

Hey, was that a ukulele I heard across the way when I was out in the garden today?

I have just been talking to my friend Dave, who takes photographs of war graves for the War Graves Photographic Project www.twgpp.org. He tells me he was interviewed just before ANZAC Day for an ABC TV programme. (That's Australian Broadcasting Commission.)
Susan