What's Flowering in the Orchard? 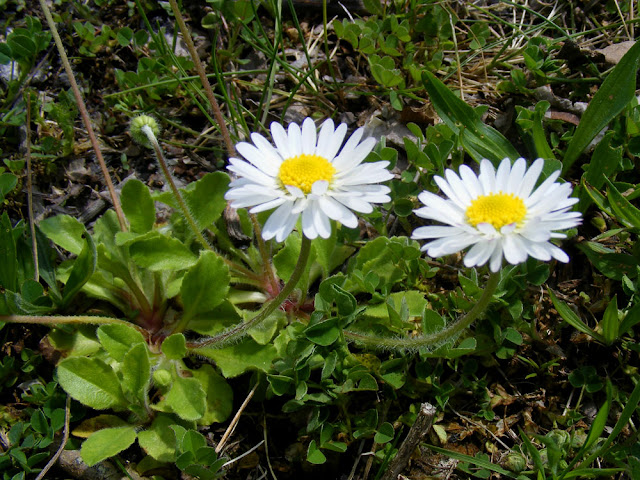 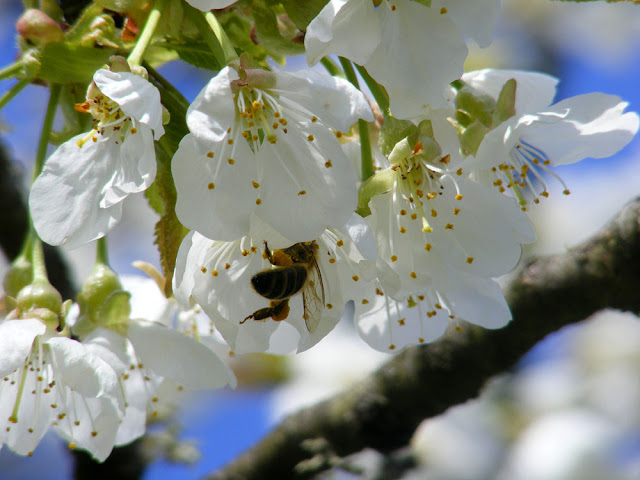 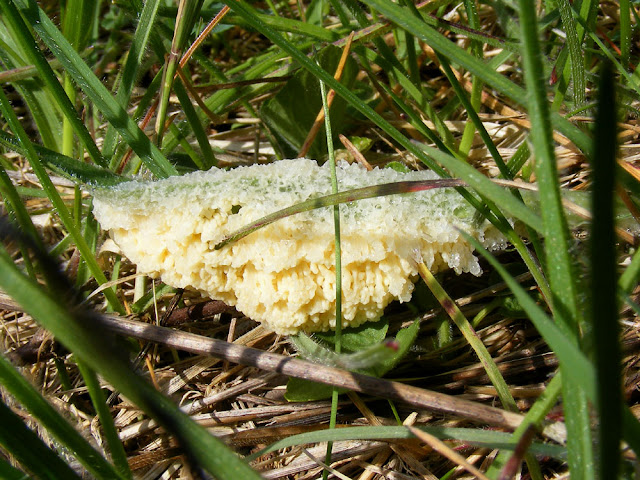 Dog Sick Slime Mould Mucilago crustacea (Fr. la mucilage en croûte). The Dog Sick Slime Mould colony in the orchard has lots of outbreaks of fruiting bodies such as this one pictured. They are abundant in the autumn, but there are a few now in the spring. This organism is usually referred to as a fungus, but in fact it is a myxomycete in the family Didymiaceae. Slime moulds are neither plant, animal nor fungi, but primitive single celled organisms like amoebae. They eat soil bacteria and slowly migrate across their habitat. Every now and then they clump together to form fruiting bodies such as the one above. The creamy sponge like material you see here is made of calcium crystals and hides a core of black spores. If you touch the organism it will release a cloud of very fine powder. They are almost always seen on grass and are very widespread and quite abundant here. 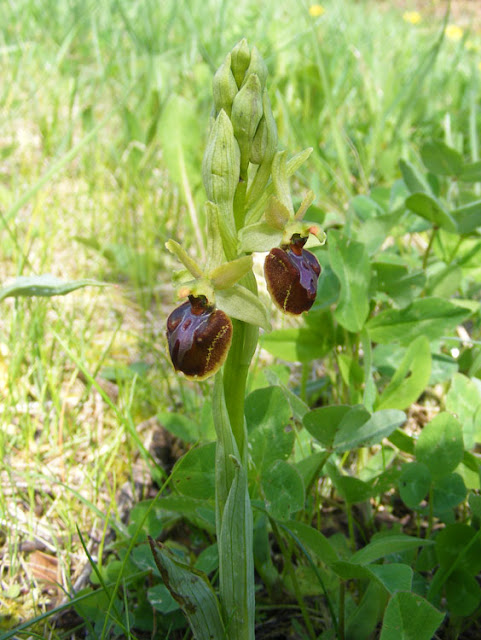 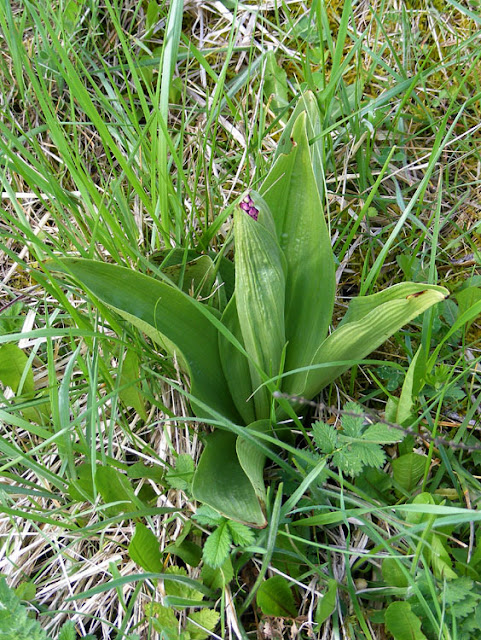 Lady Orchid Orchis purpurea (Fr. Orchis pourpre) just showing the first glimpse of the flowers to come. The previous two years the Ladies and the Spiders were hit by hard frost just as they came into flower. They can take a couple of degrees below zero, but minus six was too much for them and they keeled over. This year the weather is warm to the point of summery just as they are flowering so I have a more typical display. 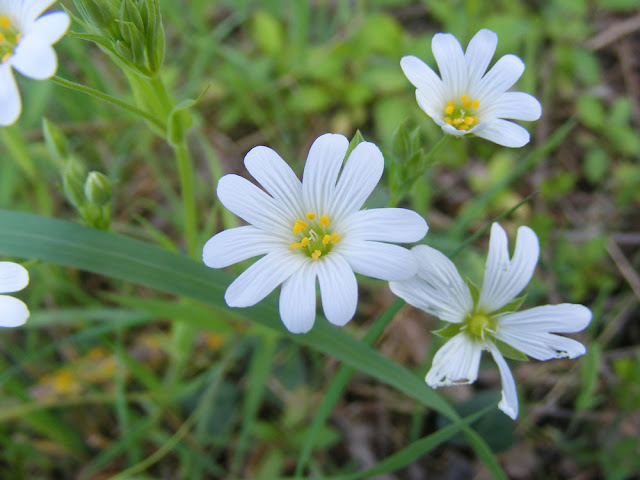 Greater Stitchwort Stellaria holostea (Fr. la Stellaire holostée). Like many yellow or white flowers, not easy to photograph and achieve any sort of detail, so I am rather pleased with this photo. 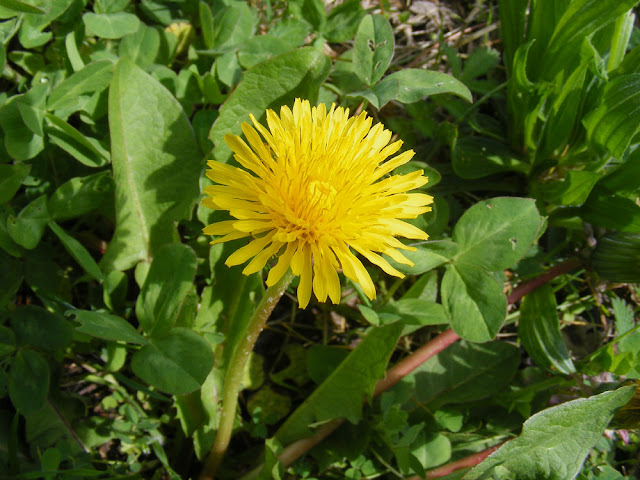 Dandelion Taraxacum agg (Fr. Pissenlit). Fresh young dandelion leaves are one of the traditional spring tonics, but once they are flowering you don't want to be eating them -- too much acrid sap which could burn your throat, and tastes too bitter to be pleasant anyway. The French name means 'piss in bed', presumably indicating that it is a diuretic. The English name refers to the 'lion's teeth' form of the leaves. 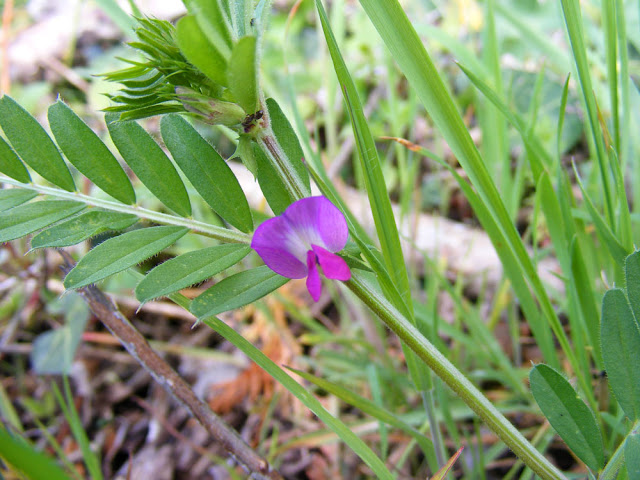 Common Vetch Vicia sativa (Fr. la Vesce commune). The scientific name indicates it is edible, and it was once widely cultivated as stock feed.

Nice. What camera are you using these days?

Same as ever. A prehistoric Fuji Finepix with a non-functioning screen.

There are so many pretty, tiny flowers in the spring.... One really has to get close to appreciate them and walking around with a camera helps