Last year sometime a video was doing the rounds of social media, showing an Asian dessert variously described as Thai or Malaysian, consisting of a watermelon stuffed with jellied fruit. In a show of bravado usually restricted to cake recipes, I proclaimed "that looks excellent, I can do that", and then said "I'll do that while we are in Australia".

Once we were in Australia doubt set in - I couldn't work out what sort of jelly to use, because (as everyone knows) gelatine won't set when mixed with pineapple, and the recipes just said "Asian jelly". There was also an issue with the watermelon. For some reason most supermarkets and fruit shops in Australia were selling quartermelons, and I definitely needed a half.

When we visited Matt and Nina in Brisbane we called in to an Asian grocery, and going purely on the pictures on the packets selected a packet of jelly. What we needed was Konnyaku, an ingredient neither of us had heard of (and we didn't even know that until yesterday morning when I started writing this blog!). Konnyaku is made from the corm (root) of  Amorphophallus konjac, also known as konjaku, konnyaku potato, devil's tongue, voodoo lily, snake palm, or elephant yam. 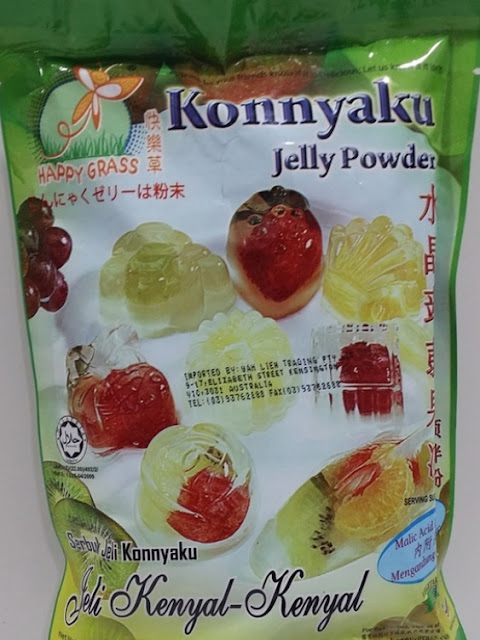 We then happened across the only half watermelon in Pittsworth in the IGA supermarket, and I was left without an excuse... 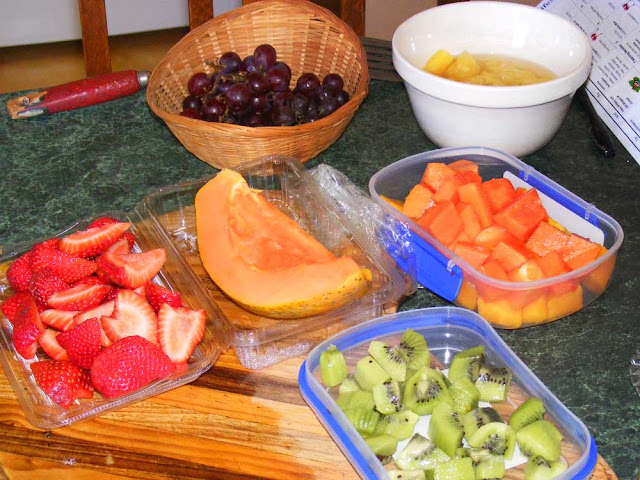 First, I cut up paw paw(papaya), mango, strawberries, kiwi fruit, grapes (if they're big ones) and opened and drained a can of pineapple. Then I cut the flesh out of the watermelon - I used a melon baller and set the flesh aside. After that I  mixed the fruit, and put it in the half watermelon shell in sort of layers. 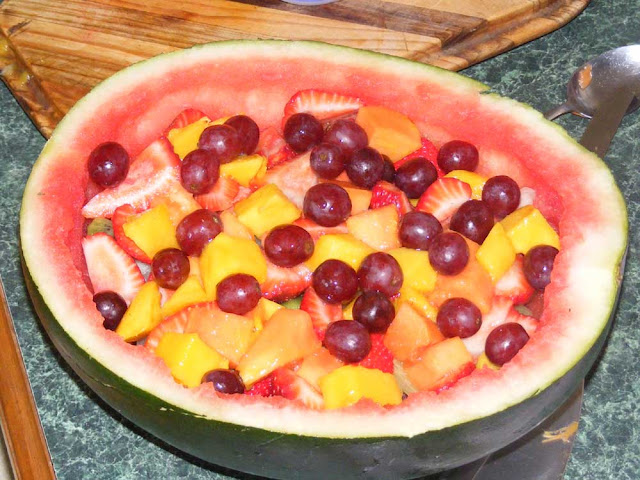 To add colour (not necessary) I made an ordinary port wine jelly from Aeroplane Jelly Crystals, just dissolving the crystals in a little boiling water (in Australia jelly mixes come in little cardboard boxes of crystals). I then made the konnyaku jelly, more or less the same way as done in the instructions here, although I added the malic acid when it was on the heat, which meant it started jelling immediately. (In my defence, the instructions on the packet were ambiguously translated from Malay, and weren't clear.) 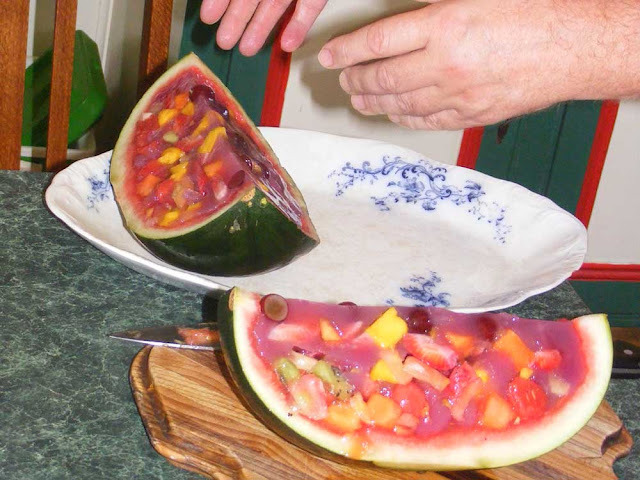 I added the two jellies, poured into the watermelon, and voila! 30 minutes in the fridge and it was ready. You just need to be a bit careful to support the melon so it is level and doesn't overflow. A suitably sized and shaped shallow bowl or a scrunched foil ring will be fine. Don't be tempted to cut a sliver of skin off underneath to create a flat base -- the melon will leak. To serve, I cut the half melon lengthwise, and then cut the quarter into slices. 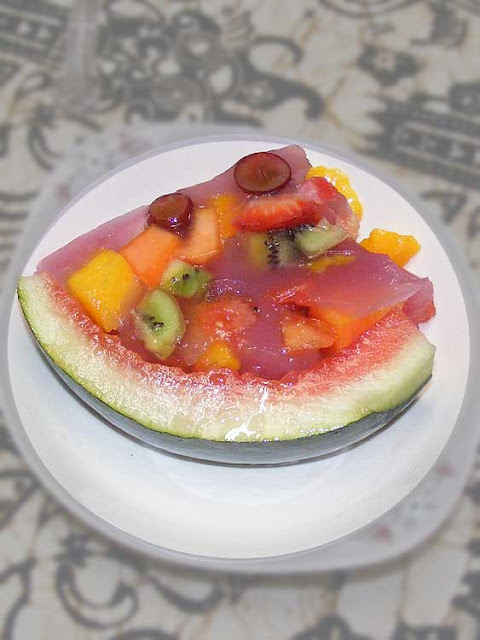 If I make this again, I will definitely make the konnyaku jelly according to instructions, and not preload the watermelon. Rather, I will pour some jelly into the watermelon, add some fruit, and repeat until the melon shell is very nearly almost full. I will definitely use less fruit. I will also drop the colouring (jelly crystals) as this somewhet detracted from the fruit.

Very impressive! And you're willing to give it a second go? Usually I feel that once is enough with an extravaganza like this but I believe that you're not as lazy as I am.